Add New York Compression To Your Drums With The Feedback Compressor

And without further ado, let’s begin.

First add a gainer module to a slot in the Instrument Send Fx module.

Set the Return to Aux 1, by clicking on the letter I. 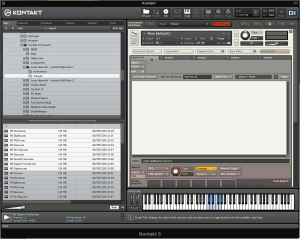 In Aux, add the Feedback Compressor to first Effect Slot. 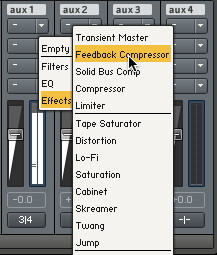 In the Feedback Compressor settings, set Attack to 35ms, Release to 375ms and Ratio to 20.

Bring the Input Gain up until you see about -10db on the Gain Reduction Meter.

Now that Aux track is sounding big and in your face, you need to blend it back in with the original. Drop the fader on Aux 1 to zero and slowly bring it up until you feel the drums the hitting but before the compressed track becomes more prominent. When you find that point, back it off just a little. 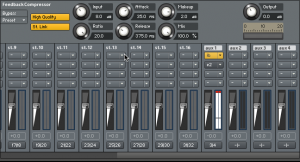 For some songs you may be looking for that in your face drum sound so it’s ok to turn up the compressed track. Also instead of keeping the level consistent it may help to adjust the level with along with the song’s intensity. And like every technique it may not work with all material or songs.

Visit: Add New York Compression To Your Drums With The Feedback Compressor

Electronic Music Compression with The Glue