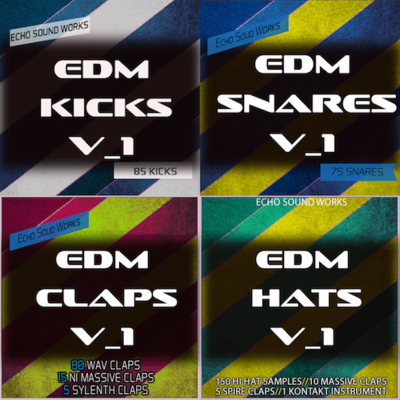 OVER 400 HIGH QUALITY SAMPLES FOR EDM

The entire bundle consists of over 400 drum samples,a bunch of synth presets for Massive, Spire and Sylenth as well as 4 custom Kontakt instruments that make programming EDM drums a breeze.

You might be asking why you would ever need to buy kick drum samples when there are a few kick drum synthesizers on the market.

The answer is simple.

No synthesizer can make a production ready kick that will stand out in a busy mix. That takes editing, proper processing and layering.

We also made a simple Kontakt instrument (version 4.2 and higher required) and put all of the kicks on just the white keys.

So auditioning and finding that perfect kick in your track couldn’t be easier.

The pack included 50 Kicks and 35 Tuned Kicks. The samples in this pack will work with genres like progressive, electro, house, electro house and progressive house and are compatible with any DAW like Logic, Pro Tools, Live etc.

Other than the kick, the snare is arguably the most important percussive element in any EDM track.

We set out to make a pack of nothing but song ready snares for genres like Electro, House, Progressive, Electro House and more.

We layered, processed and EQ’d every sample until they sounded mix ready.

Instead of searching through hundreds of samples to layer together, you can use these snares in minutes and get the same, if not better results.

The included WAV samples will work with any DAW like Logic X, Live, Cubase etc.

The custom Kontakt instrument that is included makes it even quicker to audition and layer the samples. Plus you have the benefits of controlling your sounds via MIDI.

You also have controls for very musical reverb and delay in the Kontakt interface.

But don’t worry, if you don’t have or use Kontakt, we included all of the samples as well. Here’s what is included:

EDM Claps by Echo Sound Works is a collection of nothing but the highest quality clap samples for EDM.

It comes with 80 24 bit WAV samples that have been layered and EQ’d to perfection. We also made 15 claps in NI Massive as well as 5 clap sounds in Sylenth.

To cap it all off, we made a Kontakt instrument that has every WAV clap included in this pack laid out on white keys which makes layering and auditioning sounds quick and easy if you’re a Kontakt user.

These sounds will work with a ton of different genres of EDM like Progressive, Electro, Dubstep, House, Future House and more.

We also made a custom Kontakt instrument that is velocity sensitive which means you can quickly program realistic hi hat patterns.