Sales:
35
The Abyss (Latin Abyssus bottomless) is an infinite Leap Into The Void of primeval rituals and...
ADSR_0039_0017
The Abyss
Leap Into The Void
$
26.4
https://www.adsrsounds.com/product/presets/the-abyss-absynth-presets/ 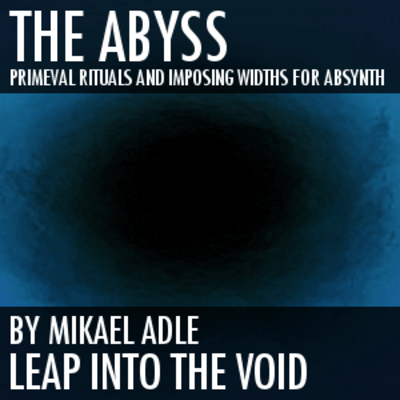 $24.00
ADDED
Add to cart More Leap Into The Void Products

The Abyss (Latin Abyssus bottomless) is an infinite Leap Into The Void of primeval rituals and imposing widths.
Pushed towards immeasurable amounts of audiovisual colors, everything in The Abyss is organic, static and alive at the same time, where time is non-existent. You could think of it as a new phase derived and progressed from the Enchantment volumes.

The sounds of The Abyss contains completely new sound design discoveries and is also built from the now vast Leap Into The Void collection of specially tailored waveforms and envelopes. There are roughly 600 sculpted waveforms each tailored for the specific module.

Main focus are tempo-synced sounds of form and un-form, all the way from thunderous, distorted and noisy to ultra short clicks and glitches. Second focus are long sounds, be it drones, soundscapes, obscured bells and sounds with long release. Third focus are sounds of various category.
Feedback has played an important role while designing The Abyss.
To try to enable as much sound shaping as possible using the assigned macro faders, I’ve decided to mainly use two channels. This does of course vary depending on the preset.

• 128 sounds of primeval rituals and imposing widths.
• Vast sound shaping possibilities.
• Coherent mapping of the macro faders.
• Detailed patch list with comments and descriptions of each sound and tweak examples where applicable. (The descriptions can also be found in Absynths meta-data on the attributes tab).
• All sounds are based on sculpted and hand drawn or stock waveforms (no samples used).
• Absynth 5.2 required.

From here on I’d like to welcome you to take part of this new order of intrepid voluptuous sculptural dissonance and grand widths. The Abyss.

Note: All sounds heard in the demo come from The Abyss with no fx used but a Low cut EQ (below 40Hz) and a small amount of limiter on the output.

Mikael Adle
Leap Into The Void