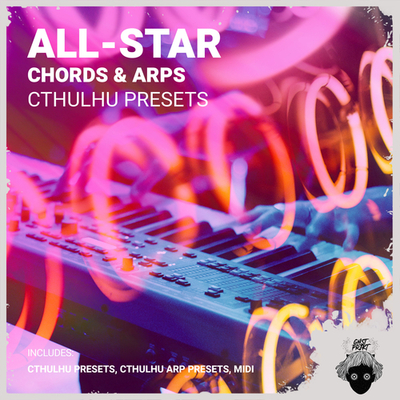 The GHST PRJKT team is back with their latest deconstruction project All-Star Chords for Cthulhu.

The design team broke down the chord progressions from some of the biggest billboard charting hits and converted them into presets for Cthulhu. If you find inspiration from artists such as Grey, Droeloe, Slushii, Snakehips, Party Next Door, Drake, Calvin Harris, Kaskade & Swedish House Mafia then these presets are for you.

In All-Star Chords for Cthulhu there are over 50 Cthulhu presets with each preset containing 3 octaves of the chord progression from left to right. Additionally there are custom Cthulhu Arp presets that when used in combination with the chord presets deliver some amazing results.

As an added bonus, 16 MIDI files have been included from some of the biggest songs to help you learn the progressions and key structure.

Future Bass, R&B, Hip Hop & EDM have all been covered in this release. All-Star Chords is an essential toolset for any music producer looking to generate ideas quickly and easily. Think outside the box with these presets as chord progressions can be re- arranged and even mixed with other presets in the same key range regardless of the genre.