Purge Cache
Today we will look at one of the easiest and fastest ways to make an Absynth chorded pad, which...

Today we will look at one of the easiest and fastest ways to make an Absynth chorded pad, which can also be used for other supporting synths and leads as well.

This quick tutorial on how to design a simple Absynth chorded pad shares how to take advantage of the various oscillator modes available to you. Once you get the hang of how the oscillators work, you can begin to create just about any sound you could possibly imagine. This, of course, is a basic tutorial which barely scratches the surface of what you can do. But as we progress together, the ideas and theories we share in our posts will being to help you unlock the true power of Absynth and allow you to truly elevate your sound design capabilities. This should be a good follow up to the recent post on oscillator modes. Let’s take a look at how to make this sound.

It starts with three basic Sine waves. Both oscillator modules A and B are set to run in Double mode, which means that we will be able to set up a secondary waveform in the oscillator module. This is how we will create our chord effect. Oscillator module C is also running a Sine wave, but in Single mode. This oscillator’s pitch value has been dropped one octave via the Transpose feature. This creates a low end presence for our Absynth chorded pad.

Clicking on the Unison tab on both the A and B oscillator modules will allow you to set up the voicing parameters. As shown in the image below, each one is running three voices. The Transpose and Randomize parameters have bet set to generate a small amount of fluctuation in the development of this Absynth chorded pad.

This next image shows that the volume levels of each oscillator module has been adjusted for balance. A Cloud filter has been inserted on the Master output strip, which affects the sound before it is sent to the Active Effect, in this case a Resonator unit which will be set up in the next step on the Effect window. The Cloud filter immediately changes the overall sound of our Absynth chorded pad and helps transform it into a more pad-like instrument. 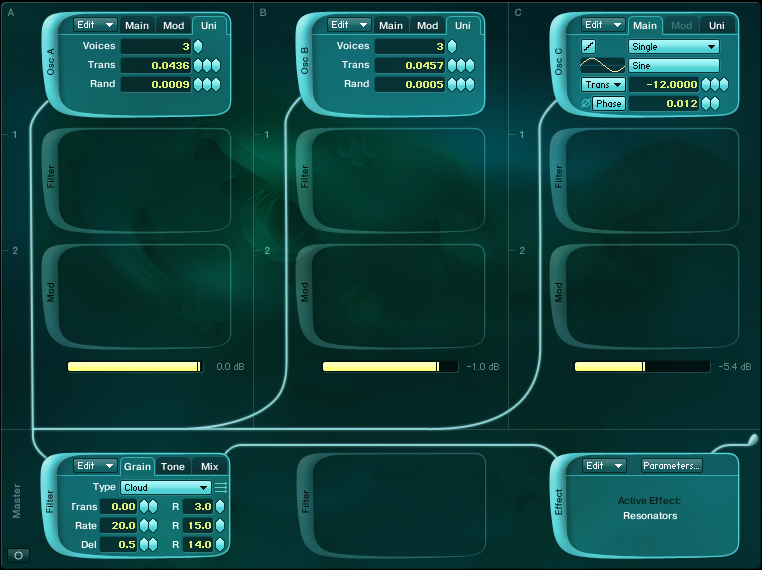 Here on the Effect window, the Resonator parameters are set up to create a deep and lush delivery of sound.

The last step in making this Absynth chorded pad is to set up the envelope curves for the oscillator modules. These are kept uniform and simple to help make this tutorial easy to follow along with. Of course, a more diverse set of envelope curves can lead to a more interesting and deeper development of a pad of this kind. 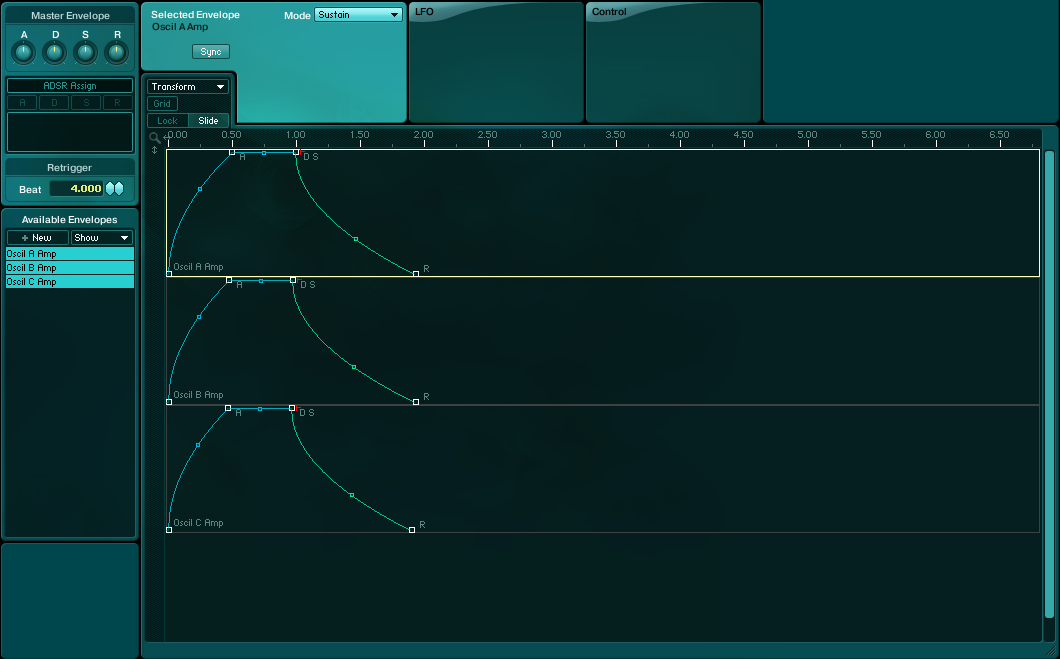 Here is a small audio sample of this Absynth chorded pad in action, playing just single notes. No processing of any kind has been applied outside of Absynth. Just imagine what a little compression can do!