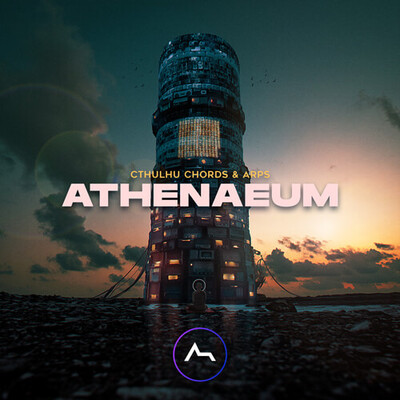 Housing all of the music-theory knowledge and melodic artistry held by the ADSR Production team, the Atheneum towers like a beacon in a creative desert. Throw open the doors to melodic inspiration using Xfer Records’ Cthulhu as the conduit.

In developing this pack we have taken a new approach with the aim of providing unique and unexpected chords that can give fresh melodic vibes to your music. Remove the struggle of coming up with chords and programming melodic arpeggiation and replace it with an epic array of options ready to match with the musical feelings and ideas you are trying to express.

Athenaeum – Melodic Chords & Arps for Cthulhu contains 100 presets, each with 3 octaves of chords, making it easier than ever to come up with a fitting variety of chord progressions in the same key. Totaling about 3600 chords with unlimited combinations, this is an epic resource for any producer. The chords and progressions can be used in any style or genre, they were not made to fit a certain niche, but as a valuable asset and launchpad, whatever your musical preferences.

Starting with presets in every main major and minor key, you can move into any key you might need by taking advantage of Cthulhu’s transpose feature and change the mood entirely. Flick the switch on Cthulhu’s arpeggiator and those chord presets become a melodic lead with tons of flexibility. We’ve even included 50 custom arpeggiator presets that will give you even more flexibility and inspiration for a variety of music styles.

To make it even easier to navigate Athenaeum, we have included 30 MIDI examples of chord progressions accompanied by 30 corresponding MIDI files that link to the current presets, along with 15 chords progression WAV loops. Together, these act like a tutorial of how this pack should be used as well as being viable melodic ideas for your own music.