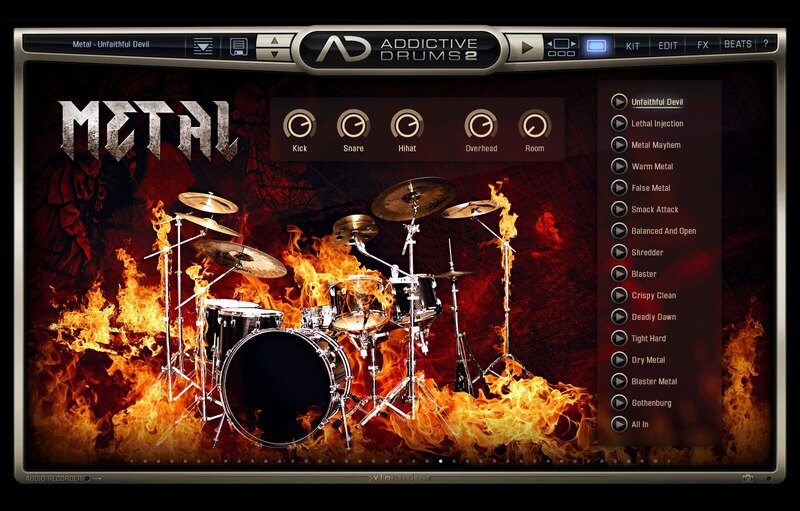 Unleash the sound and fury!

When you think of a metal studio you might not think of sunny Venice Beach California but that’s where Ross Robinson creates his raw in-to-the-bone sound. Known as The Godfather of Nu Metal, Robinson is world-renowned for his production skills, having presided over seminal albums for bands like Sepultura and Limp Bizkit as well as discovering bands like Korn, Slipknot, and Limp Bizkit. His place in the pantheon of metal is unquestioned.

As a producer, Ross always pushes a band (sometimes physically) all the way to their limits to get to the core of the realest and rawest performances. He often records the whole band gathered tight around the drums, feeling their energy as the heartbeat of the song, and to make sure everyone feels the raw power of the drummer, he built “The Grotto”, a small room whose walls and floor are covered in actual ROCK! The punch and rawness Ross gets out of this man-made drum cave is elemental magic.

This 18 piece kit delivers the goods in any style of Metal. It comprises thunderous maple toms, and a heavy kick from Ludwig, vicious Zildjian cymbals and a sharp balanced snare from Gretsch, made of HAMMERED METAL, just in case you needed convincing! Seeing as this ADpak is designed to allow you to go all in, we’ve added a special feature that’s a must for the modern Metal producer; “Trig” samples (recorded with extra attack and shorter decay) for putting in the Xtra slot and beefing out the kick and snare.

Oh, and it was all hand-picked and tuned by metal legend Ross Robinson for the recording sessions. No biggie!

XLN Audio wanted to make sure that with just a few clicks, users could add world-class drums to their productions, and have full control over them, almost as if they’d been at the recording session themselves. To begin with, XLN carefully hand-selected each kit, piece by piece, to get just the right sound. Then they found just the right space to record each kit. A studio with the right mix of acoustics, gear, drummer and engineers to coax the best out of it, make it sing, and capture its essence.

Every kit was meticulously recorded with a variety of strokes sampled for each piece. Snares were recorded from above, and below. Kicks from the front, and from the rear near the beater. The sound coming back from the live room was recorded separately on stereo mics. All these signals are combined in the software to give you amazingly real live-sounding drums. If you want to hear these drums at their very best, the ADpak comes with a host of presets configured for specific drum sounds, or you can take full control and control every aspect of the individual drums. Dial-up the room noise for some stadium rock epicness. Tune the toms to vibe with your keys. Turn up the overheads, add distortion, or reverb, change the attack…the possibilities are literally endless.

When you’re working on progressive rock, or experimental music with complex rhythms, and intricate playing, you need a high-end kit capable of capturing both subtle nuance and powerful punchiness. XLN went to the flagship line from DW, the Collector’s Series. It’s like the Rolls Royce of drum kits. The shells are cold-pressed for extra stiffness and extra resonance, and intense attention is paid to every detail in the construction process. Each shell is tapped in the factory to test its natural frequency, which is then stamped on the inside, so it can be tuned up to the precise note it was born to sing.

A high-end sound that’s raw but controlled, rich but gritty, everything in perfect balance. A kit that can deliver the goods, no matter how hard you push it.

Metal drumming requires power, stamina and precision. This pak delivers all of those things at extreme levels.

Over 300 inspiring beats from the diabolical mind of metal drummer Daniel Erlandsson (Arch Enemy, In Flames, Eucharist). Contains shorter grooves, longer sections and plenty of variations, making it easy to arrange your next metal masterpiece. Works with any Addictive Drums kit, but is particularly well suited for the Metal Kit.

Dust off your battle hammer and put on your leather pants. This is the dark and sinister Metal Songs MIDI Pak!

Bring out the darkness in you and your music with these fast, dark, and sinister grooves. Included are 20 Metal Songs and a large number of blasting fills totalling 200 hard-hitting performances.