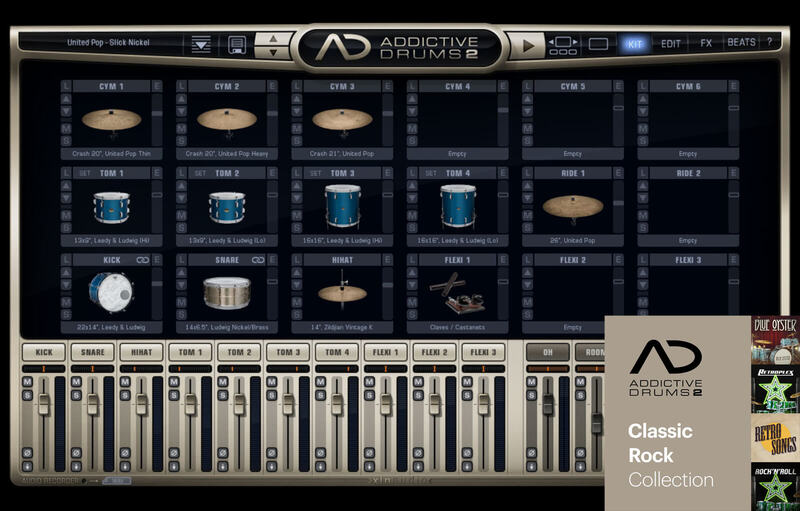 Decades of recording ingenuity to perfect, a few seconds to drop into your DAW. For the timeless sound of British rock drums, look no further than the Classic Rock Collection.

The sound that rocked the ’70s.

Legendary Drums of the Rock Gods

Decades of recording ingenuity to perfect, a few seconds to drop into your DAW. For the timeless sound of British rock drums, look no further than the Classic Rock Collection. One thunderous late ’60s Blue Oyster kit just like the one Jon Bonham kicked the triplets out of with Led Zeppelin. One superbly recorded ’70s Retroplex kit like the one Keith Moon played on stage with a live goldfish in.

Complete with the Retro Songs and Rock’n’Roll MIDIpaks giving you beats from hard rock to Motown, controllable presets, dialable room tone, cowbell, more cowbell! It’s the drum sound that changed the music world forever, bundled up in a box for your music-making pleasure. Load them up in your DAW and throw the TV out of the window!

The Sound of Classic Rock

Size does matter! This ADpak is inspired by the setup of Led Zeppelin drummer John Bonham. The big sizes, coated heads, and characteristic tuning give you a clear and thunderous drum sound that is reminiscent of the late 60s.

The included presets provide instant access to inspiring sounds ranging from clean and pristine to distorted and heavily processed. Use presets as-is or easily tweak them to achieve a unique sound that’s exactly right for your music.

The Sound of Glam Rock

The acrylic see-through Vistalite drums became popular in the early 70s for their great looks, fast attack and clear sustain. Drumming legend Keith Moon (The Who) played live sets with an extra water-filled Vistalite floor tom used as a fishbowl!

The included presets provide instant access to inspiring sounds ranging from clean and pristine to distorted and heavily processed. Use presets as-is or easily tweak them to achieve a unique sound that’s exactly right for your music.

Classic Grooves from the 60s and 70s.

From early 60s Motown to thunderous heavy rock of the 70s, this MIDIpak gives you tons of inspiring grooves in different tempos and feels.

Bring back the good times with this MIDIpak full of great beats and grooves inspired by the 60s and 70s! This MIDIpak contains 35 complete songs (over 200 sections) all played by a real drummer. It is compatible with any Addictive Drums 2 ADpak, but really well suited for Black Oyster, Blue Oyster, and Retroplex.

Outrageous Rock ‘n’ Roll GroovesGreat Rock ‘n’ Roll songs have bold and catchy rhythms and so does this MIDIpak! If you want to write Rock ‘n’ Roll tracks with a great live feel, be sure to check out this MIDIpak.These fantastic Rock ‘n’ Roll grooves are played by real drummers and will bring any track to life. These grooves sound great with any of the amazing ADpaks for Addictive Drums 2, but they are particularly well suited for the outrageously awesome Retroplex kit!