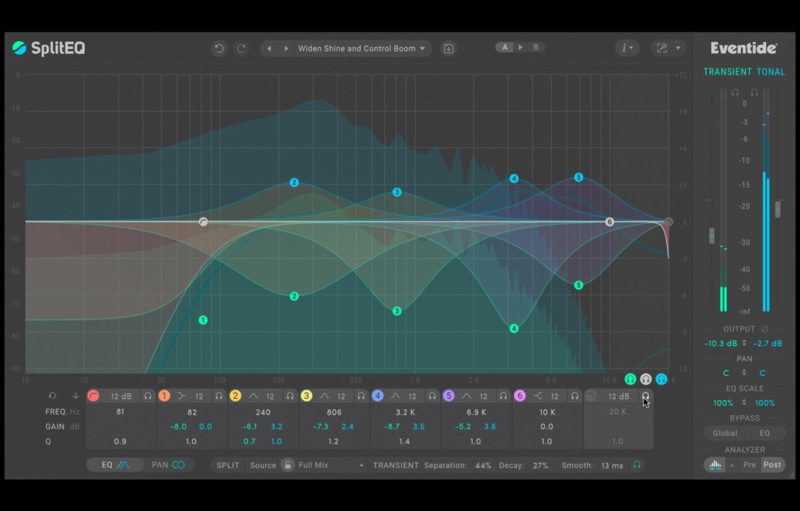 SplitEQ is a groundbreaking EQ that offers a new approach to corrective and creative audio equalization. It excels at Enhancing, Repairing, Rebalancing, and Widening any musical source or audio signal. More than just an EQ—It’s a new and better tool.

A New Era in Equalization

SplitEQ is a groundbreaking EQ that offers a new approach to corrective and creative audio equalization. It excels at Enhancing, Repairing, Rebalancing, and Widening any musical source or audio signal. SplitEQ is both a surgical tool for fixing particularly nasty problems and a creative tool that opens up exciting new musical possibilities. More than just an EQ—It’s a new and better tool.

At first glance, it’s a parametric EQ with 8 bands of precise musical filters. What’s new and different is Eventide’s powerful Structural Split engine divides the incoming audio into separate Transient and Tonal streams that feed the 8 bands of “Split” parametric EQ. This approach is musically useful and makes common EQ problems easy to solve, even in a complex mix.

By applying EQ to Transient and Tonal separately, you can fix many of the problems normally attempted by complex combinations of EQ, compression, transient designers, de-essers, multi-band compression, spatial processors, or dynamic EQ. Simplify and declutter your workflow, get better results and create new sounds.

SplitEQ reduces the distance between what you want to do and how you actually do it, and with fewer tradeoffs of other EQs. A low-shelf boost on a kick drum will yield muddiness rather than delicious oomph. A low cut on a low male vocal removes plosives but at the expense of low-end richness. SplitEQ gives you the surgical control to address the problematic part of a sound without losing the magic and without the need for additional tools.

SplitEQ is not just a corrective tool, it is also a new type of creative tool for taking your mixes to new heights through its independent L/R and Mid-Side panning. With SplitEQ every source is split into a pair of sonically distinct elements offering your music, mixes, and audio signals an extraordinary new level of musicality.

SplitEQ comes with a Factory Library of over 150 presets to solve many of today’s standard corrective and complex mixing problems in a cleaner and faster way. The presets are designed to Enhance, Repair, Rebalance and Widen various instruments including drums, vocals, guitar and more. A/B comparison and Undo/Redo make it easy to explore ideas without losing where you started.

Whether you’re working on individual tracks, a full mix, or cleaning up a two-track loop, you’ll find SplitEQ to be an inspiring and powerful tool that allows you to approach the material in a new, musical and sonically meaningful way.

The beating heart of SplitEQ analyzes the incoming audio and separates it into two separate streams:

SplitEQ’s filters are state-of-the-art, pristine and musical. The User Interface has been designed to streamline workflow. Add sheen to vocals without boosting sibilance or harshness. Enhance acoustic guitar harmonics while reducing string buzz.

Continuous L/R or Mid/Side panning of the Transient and Tonal components for each of the eight bands.

Enhance: With independent control of the Tonal and Transient elements of an instrument, SplitEQ can be used to deliver punch, detail, sheen, breathiness, diction, tightness, thump, and pluck.

Repair: A unique audio repair and restoration tool, SplitEQ allows you to surgically tune the Transient and Tonal response independently. Remove a kick drum’s boom without losing its thump.

Widen: SplitEQ allows for precise multi-band stereo image manipulation of the Tonal and Transient elements of each frequency band. L/R and Mid/Side panning are supported. Spatialize a beat like never before.

With SplitEQ you can hear and even see your sound in new ways. Eventide’s Structural approach mimics the way in which people interpret sound and the spectrum display offers an inside look into what you’re hearing. Solo only the transients, or a single band, or only the transients on a single band. Use the real-time spectrum analyzer to track down problematic resonances or transients by displaying the tonal and transient streams separately. SplitEQ adds a new dimension to your trouble-shooting toolkit.

Eventide’s team took all the knowledge they had about recording, threw it out the window, then headed down to the studio to lay down some badly recorded tracks. Double-headed kick drum with no port? Check. Ill-advised mic placement on snare? Check. Why? To prove that SplitEQ works well on a wide range of sonically challenged material. Eventide created an entire folder of presets for those less-than-perfect recordings.