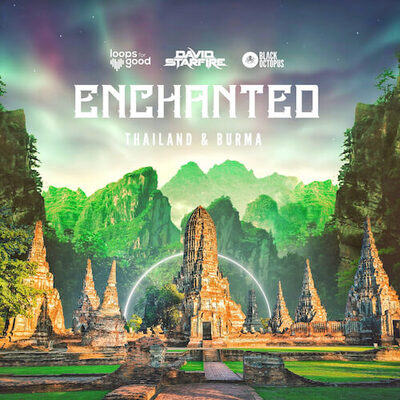 David Starfire and Black Octopus Sound have teamed up to create a new brand of sample packs called Loops For Good where 10 % from each pack goes to a grassroots charity for those in need.

The first pack from Loops for Good, “Enchanted Thailand & Burma”, features sounds that were recorded when David travelled to South East Asia to produce his Karuna album. There are over a million Burmese refugees living in Thailand due to the ongoing political crisis in Burma/Myanmar. David collaborated with local musicians to learn about their culture and to support this underprivileged community. All of the musicians featured in this pack were paid for their art and we’re donating 10% of net proceeds to the Thai Freedom House in Chiang Mai that will go towards educational programs for Burmese refugee children.

Included in this one-of-a-kind sample pack is a variety of unique instruments from the region including native drums, gongs, flutes, xylophone, fiddle, harp, cymbals, and vocals.

Even the names of some of the musicians who played the instrument are included. This is the first pack that features the sought-after signature sounds from David Starfire’s personal collection of Drum Hits, Basses, and Ableton Instrument racks which will take your electronic dance music or hip hop productions to the next level! This sample pack is full of charm and enchantment and is beautifully produced, mixed, and mastered by David Starfire.

Due to it being largely recorded in refugee camps, temples, and field recordings, this pack has a unique character that studio-produced sample packs can’t replicate.

When you purchase Enchanted Thailand & Burma, you will be captivated by the organic sounds played by talented musicians as well as support a great cause by helping this struggling community to have a better life.