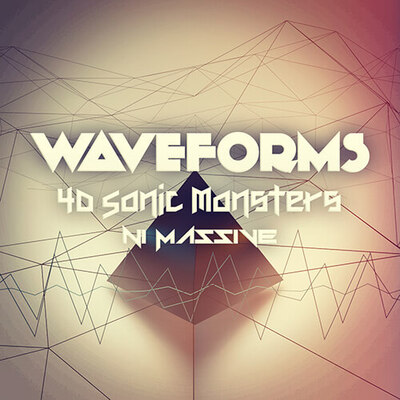 WaveForms for NI Massive is a 40 sound set for NI Massive. Designed around Ambient and Chillout sequences, sound-fx, basses, and motion-heavy synth sounds, Producers in the Downbeat, Chillout and Cinematic genres will find plenty of sonic monsters to add a deep flavor to their mixes and is also a really useful tool for D&B, Techno, Dubstep, and IDM producers alike!

Each sound has been carefully crafted to include macro controls to allow advanced manipulation of the patch to match your production.

Get ahead of the game and create the best sounds you’ve ever attempted in your life. Once you load these patches into Massive, you can push them even further with Massive’s exclusive bank of 8 macro controls, giving you the power to create deep, dark and atmospheric sounds ready to wipe up dance floors worldwide.

Each patch is completely unique, developed with the care and precision necessary to make sure the sound is thick but not overly distorted. We take raw waves and experiment slowly, trying to find special sounds.

We add effects, drop the pitch, modulate the wave table, add a touch of bit crusher, throw in some multi-band distortion, possibly EQ it a touch to remove some harshness, and maybe pitch bend it to make it slide. We test and tweak as we go until the best, most savage sounds come out the end.

The 40 sounds in this pack are designed to be equally effective as single elements to enhance your mix, or simply to work together within the context of your tracks tempo and musical key. These sounds can be tweaked to evolve throughout your mix as well as used for massive effects drops, breakdowns and builds.