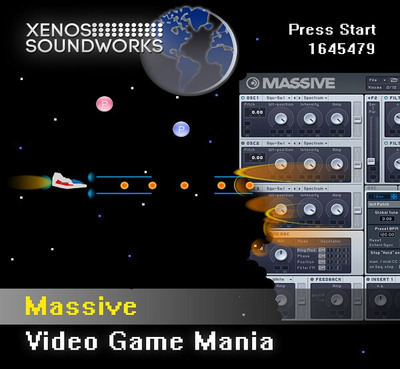 Videogame Mania is a high-end collection of 64 authentic retro chiptune style Massive presets, created by one of Native Instruments’ own sound designers.

This soundset contains classic SID style arps, authentic videogame sound effects, gritty 8-bit basses and quirky leads which fans of such systems as the NES, Commodore64 and others will instantly recognize.

Also included are entirely original creations that strive to preserve the character of those oldschool, low-fi computer soundchips.

There is more to an authentic quality 8-bit sound than a squarewave on any given synth.

Massive’s functionality allows for the ultra-precise tuning of the finer sonic elements that allow a trained ear to differentiate between the same patch on a common VST synth, and a Commodore64 or NES.

All 8 Macro Controls have been assigned in each patch for maximum versatility and tweakability. As the original version of this set was created years prior, this new and improved version also added additional patches.

Please note that this soundset is in NMSV format only.

Everyone who purchased ‘Videogame Mania’ prior to 9-29-14 is entitled to the new update for free upon showing proof of purchase.

Changes to the original version are as follows:

– Filled in the Macros so each patch uses all 8.

– Improvments on some existing patches.