Purge Cache
In today's advanced 3-part tutorial, we will discuss how you can setup and mange Instrument...

In today’s advanced 3-part tutorial, we will discuss how you can setup and mange Instrument routing in Kontakt. We will go over Insert and Send Effects, Instruments and Groups as well as the new bus system introduced in Kontakt 5.

If you have Kontakt 5 you can take advantage of the 16 Instrument Buses which can be utilized for more flexible effect routing. The Instrument Buses can be used as an additional effect chain for one or more groups. You can have up to sixteen each with eight effect modules.

Bus Insert Fx functions exactly the same way as Group Insert Fx except that effect modules cannot be set to post-amp. Also, the outputs of the Groups you have routed to any Bus are summed and processed together so all effects operate in a monophonic fashion without the ability to distinguish between voices.

You can select the Bus you wish to edit by clicking on the output level meter at the top of this section or by selecting it from the drop down menu below the Edit All Buses button. If you want to edit all Buses at once, activate the Edit All Buses button. While this button is active, any changes you make on the Bus level will affect all Buses at once.

The Instrument Bus level has an amplifier section with Volume, Pan and an output controls. This section functions exactly the same way as the Group level except you have an extra option to route the output through the instrument output, but bypass the Instrument Insert Fx chain. To do this, select Program Out (bypass InsertFX) from the output menu. 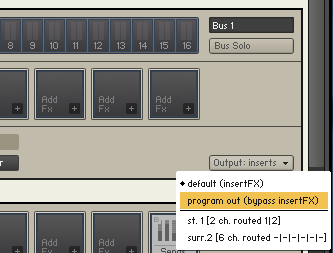 Let’s take a look at using the Instrument Bus in a real world scenario.

Say you have a drum kit with several samples with different mic placements, Kick Inside, Kick Outside, Snare Top, Snare Bottom. These samples are placed in their corresponding groups. Each group will have it’s own Group InsertFx chain, but you can route the kicks to a bus to be processed by the same Insert Fx chain. And then you can route to the snares to a completely different bus to be processed with a completely different InsertFx chain. 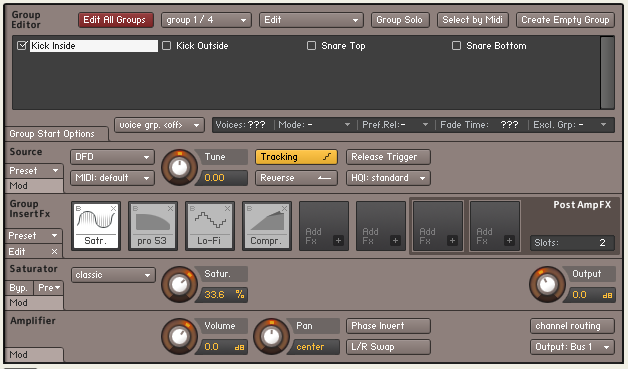 The Kick Inside group has a little saturation, Pro 53, Lo-Fi and Compression. It is being routed to Bus 1. 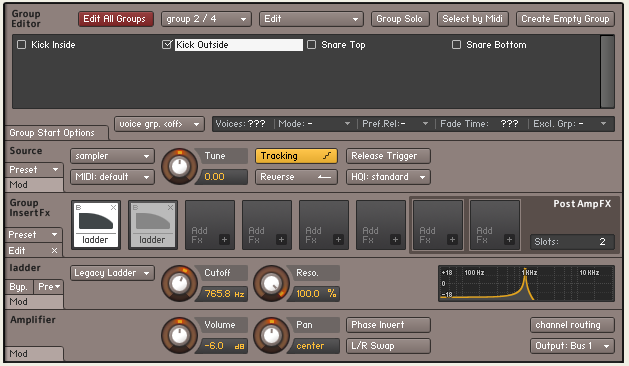 The Kick Outside group has a few filters on it. It is being routed to Bus 1. 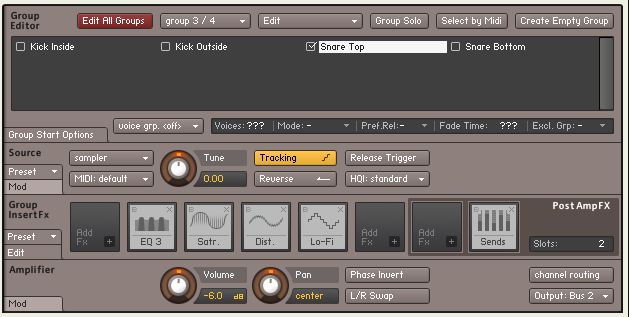 The Snare Top group has some EQ, Saturation, Distortion and Lo-Fi for good measure. It is being routed to Bus 2.

The Snare Bottom group has pre and post eq’s. It is being routed to Bus 2.

Here is the InsertFx chain for Bus 1. Both Kick groups are being processed by these modules before being sent to the Instrument level.

And here is the InsertFx chain for Bus 2. Both Snare groups are being processed by these modules before being sent to the Instrument level.

The Instrument Buses in Kontakt 5 is a very powerful feature and along with some of the other features of Kontakt 5 make this new version worth the upgrade.

Instrument InsertFx operates on the summed output signal of all Groups and Buses (unless they are routed directly to an Output Channel). It works exactly as the Bus InsertFx chain, with the exception that it doesn’t have an Amplifier section; volume, pan and output control are controlled in the instrument header. And like the Bus InsertFx chain, all effects operate in a monophonic fashion without the ability to distinguish between voices.

In contrast to the insert chains, the Instrument Send Effects work in parallel, and only receive signals that you explicitly send there via the Send Levels module. And like the Instrument InsertFx chain, all effects operate in a monophonic fashion without the ability to distinguish between voices.

To use a module as a send effect, add it to one of your Instrument’s Send Effects slots, and tap a source signal to be sent there by adding the Send Levels module to either a Group, Bus (Kontakt 5) or InstrumentFx Effects chain.

Let’s add a reverb to to our instrument.

In your instruments SendFx, add a reverb module.

Add a Send Levels module to an empty slot in the Group InsertFx, Bus InsertFx or Instrument Insert Fx.

You can also change the output assignment of the Instrument SendFx module. This allows you to isolate wet effect signals from your Instrument’s Output Channel. 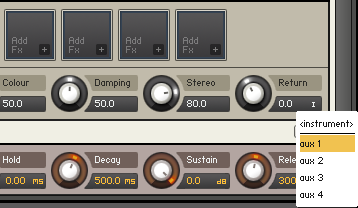 Tip: Save an empty effect chains as a preset so that you can quickly clear out a chain without having to remove modules one by one.

Available channels are determined by your audio interface or your host software.

Until next time…Now go make some music.