Purge Cache
In today's advanced 3-part tutorial, we will discuss how you can setup and mange Instrument...

In today’s advanced 3-part tutorial, we will discuss how you can setup and mange Instrument routing in Kontakt. We will go over Insert and Send Effects, Instruments and Groups as well as the new bus system introduced in Kontakt 5.

In Kontakt, the basic building block of sound is the Instrument. And in each Instrument you have one or more groups. And if you have Multiple Instrument’s, they can be saved as a Multi. These are the elements that make up the signal path in Kontakt. In the image below you can see the relationship between Multi’s, Instruments and Groups and how a signal flows between all of them to the output of your speakers or DAW. 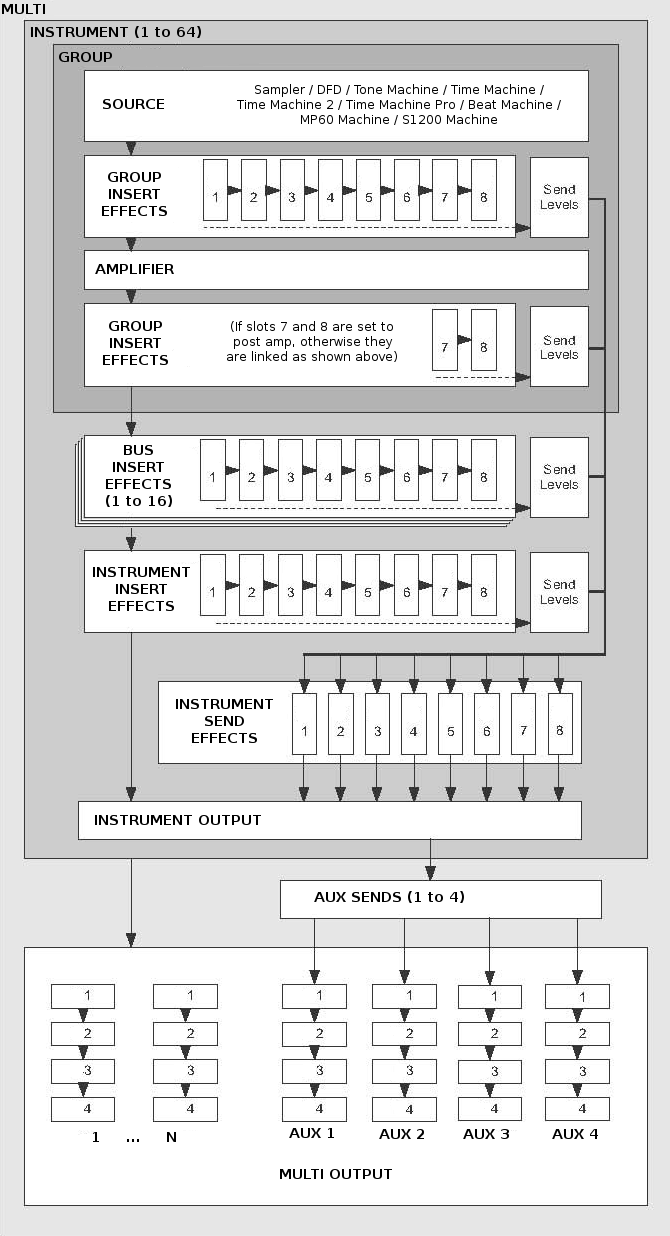 Before we continue, let’s make a new instrument or open an existing one. Once you have your instrument loaded, enter edit mode. If creating a new instrument, be sure to add a few samples to the mapping editor.

Sound in the instrument starts at the Source Module. While it doesn’t have any routing options, it does control the playback engine that the instrument uses. I will cover the various modes in a another tutorial.

When the sound is generated from the Source Module it enters the Group Insert Fx. The Group Insert Fx is a chain of modules that will process the output of a specific group in the order they are placed in the chain (left to right). I find the factory presets useful as starting points but you will definitely want to experiment and roll your own.

Note: In Kontakt 5, all eight slots can be configured for post-amp.

To change the routing of the last two slots, simply click the Pre-Amp or Post-Amp button.

In Kontakt 5, to change the routing, change the number of slots to the desired number of post-amp slots. Slots will be enabled for post-amp starting from right to left.

To use a module as a send effect, add it to one of your Instrument Send Fx slots and tap a source signal to be sent there by adding the Send Levels module to either a Group, Bus (Kontakt 5) or Instrument Insert Effects chain.

After you have added a module to a slot in the Send Effects, you’ll notice on its panel that it has a control labeled Return on its right side. This knob allows you to adjust the return level for this effect, as well as choose a routing target for its output signal by clicking on the small “I” icon next to the numerical readout. 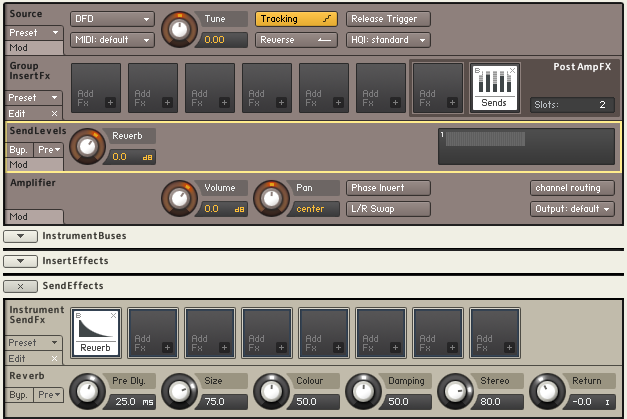 As you work with Group Insert Fx keep the following in mind:

-The Group Insert Fx modules work in a polyphonic manner, meaning that the effect will be calculated separately for each voice that you play. This may have unexpected results because each module’s CPU resources will be multiplied by the number of voices. So if you don’t need Group-specific or polyphonic effect processing, use the Bus (Kontakt 5) or Instrument Insert Fx instead where effects operate on a summed signal.

-Most of the parameters of Group insert effects can be modulated internally via the modulation matrix. This matrix can be accessed via the Modulation button in the lower left corner of an effect panel.

-Many of Kontakt’s signal processors are capable of processing multichannel signals. If a compatible effect follows a multichannel zone or a Surround Panner, it will operate on all surround channels.

Tip: Modules can be added from the the Modules tab of the browser by dragging it into a slot. Note that some modules can only be added to certain places.

The Amplifier module follows the Source Module and the Group Insert Fx chain at the Group level of Kontakt’s signal flow. It allows you to control the volume of the signal before it enters the Instrument level, panning and changing the default output channel assignment and channel routing that occurs between the Group and Instrument levels. Also when combined with modulation, the Amplifier module allows you to use volume envelopes.

The Amplifier cannot be removed from a Group and you can only have one Amplifier within a Group. All signals generated by the Source Module in the Group will pass the Amplifier. The Amplifier contains the following controls:

-Volume: Adjusts the overall level of all signals that originate from this Group.

-Pan: If the Group is being routed to a stereo Output Channel, this control allows you to place the signal in the stereo panorama.

Note that the Volume and Pan controls affect the playback of all Zones in your Group; if you want to adjust these parameters on a per-Zone basis, change them in the Mapping Editor or use Zone Envelopes.

The Channel Routing control allows you to change the channel assignment aspects of the connection between the Group and Instrument level, as well as create special routing configurations for up-mixing or down-mixing your Group signal to a different channel configuration.

To open the Channel Routing matrix, click on the channel routing button. 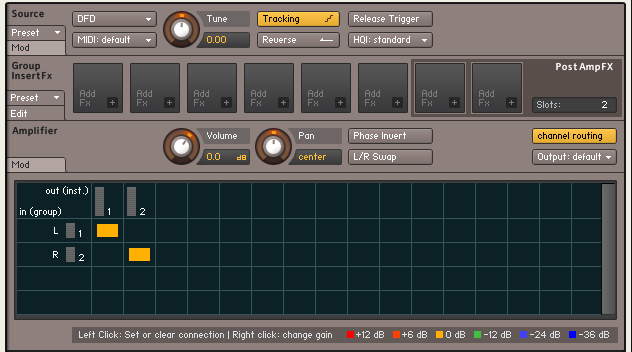 You can create a connection between an input and an output channel by clicking into the field that is crossed by the respective row and column. An existing connection will be indicated by a colored rectangle; left-click on it again to remove the connection.

For more complex routings that convert between different channel configurations, it is possible to send an input signal to multiple output channels, or to mix multiple input signals down to one output channel. You do this simply by creating more than one connection within a row (mix-up) or a column (mix-down). In these cases, sometimes its often desirable to create connections with different gain levels.

To change the level of of a connection right-click the field. The level will change as indicated by the color of the rectangle. Repeated clicking will cycle through a number of preset levels. The preset levels and their respective colors are listed at the bottom of the routing matrix.

Let’s see how we can mix a surround signal down to stereo.

First convert the 2-ch signal entering the Amplifier into a 5.1 surround signal by adding a Surround Panner module (Effects>Surround Panner) into the Group Insert Fx chain . You should now see the additional channels on the vertical axis. 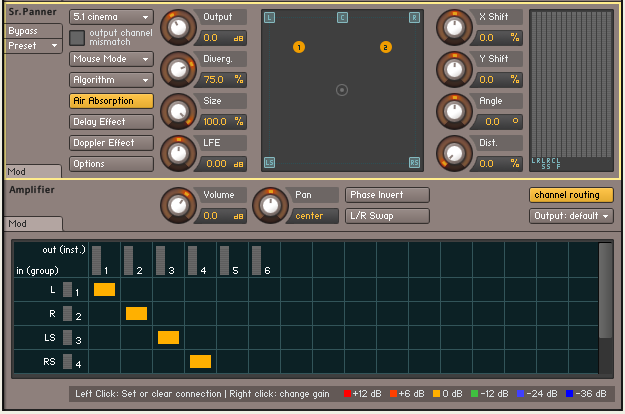 Next create connection between all five surround channel inputs and both outputs by clicking in each field. Your routing matrix should look like this (you need to scroll to see the C and LF channels):

To mix the 5.1 surround signal down to stereo, we need to reduce the volume of the rear channels (LS and RS). Right click on both fields for LS, 1 and LS, 2 until the preset level is light blue (-24db).

The last control of the Amplifier allows you to specify an alternate Output Channel or Bus routing (Kontakt 5) for the Group. When set to Default (Instrument), the Group’s output is routed to the Instrument Insert Fx chain., then to the output of the Instrument, which is the Channel Output selected in the Instrument Header.

If you are using Kontakt 5 and select a Bus from this dropdown, the Group’s audio will be routed to that Bus Insert Fx chain, then to the Amplifier’s output, which by default, is the Instrument Insert Fx chain.

You can also send the Group’s audio directly to a Channel Output, which will bypass any Bus and/or Instrument effects.

It sounds complicated i know. But if you are confused by the routing at anytime just refer to the routing image posted earlier in this tutorial.

Until next time…Now go make some music.