Back To The Future With Time Machine Pro

Time Machine Pro is used for the highest quality, independent pitch-shifting and time-stretching. It is best used for realistic changes and not extreme effects. In today’s quick tutorial we’ll take a sample Back To The Future With Time Machine Pro.

[aside title=”Pro Tip!”]In the wave editor Kontakt needs to know Zone Length or BPM. You only need to input one of these values and Kontakt will calculate the other![/aside]

Due to the higher quality, the CPU and RAM consumption of Time Machine rather high. The controls are mostly identical to those of the Time Machine. Let’s take a look.

Tune: Changes the playback pitch within one octave up or down, without affecting the playback speed.
Speed: Changes the playback speed independently of the pitch. This value is displayed as a percentage of the original speed by default, so 200% doubles the playback speed, while 50% halves it. The control goes all the way down to 0%, which freezes the sound at its current playback position. The Speed parameter can also be synchronized to your host or Master Editor tempo; in this mode, your samples will be stretched to match the length of a note value. To do this, click the displayed unit of the Speed control and select a note value from the drop-down menu, then dial in a numerator for this value with the Speed knob. To switch back to un-synchronized mode, just choose the Default entry from the drop-down menu.
Tracking: If this button is activated, the playback pitch will depend on the notes that you play. When disabled, the pitch won’t follow the keyboard.
Release Trigger: Allows samples in this Group to be triggered when a MIDI note-off command is received. This function and its additional parameters are covered by the description of the Sampler mode above.
Legato: If this button is activated and you play multiple notes in a legato fashion, KONTAKT will carry its current playback position over to each following note, rather than playing each Sample from the beginning.
Reverse: Time Machine Pro is the only time machine module that offers a real-time audio reverse function.
HQ Mode: Switches between “efficient” and “HQ” mode and displays advanced controls described below.
Envelope Order (Env.Order): Sets the order of the spectral envelope (formant) estimation. The default is set to 25% which works fine for most material. If the input audio is really high pitch- ed the order should be lowered, cogently, if the input audio is low pitched the value should be raised.
Formant Shift (Frm.Shift): Sets the spectral envelope’s shift factor. The default is set to zero which works fine for most material. This spectral shift is performed before the overall pitch shifting.
Keep Formants: With this control active, Kontakt will perform formant preserving pitch shifting for a more natural pitch shift.

Ok we know the Source Module mode, we know the controls…let’s grab a sample and hop in our Delorean. 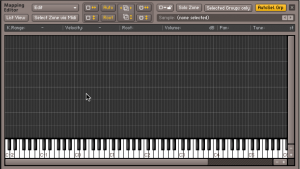 In the Files tab of the Browser, find your sample and drag it into the Zone Grid of the Mapping Editor. The Keyrange doesn’t matter. 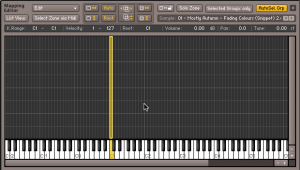 Double-click the Zone to open the Wave Editor.

Set the Start and End of the Sample. If you’re sample has been prepped and has perfect start and ends, Kontakt will automatically derive the Zone Length and BPM. If not, we’ll need to set the start and end. Drag the S marker to the start of where we want our sample to be. Use the +/- or rubber band selection to zoom in if you need to.

Drag the E marker to the end of where we want our sample to be.

Click the Sync/Slice tab and verify that the Zone Length and/or BPM is correct. If they are not, change one of them to a known value. In the case of my sample, i know the BPM is 117, not 78. So i turn the Grid on, change the BPM to 117, change the Zone Length to 8 bars and turn the grid off again. 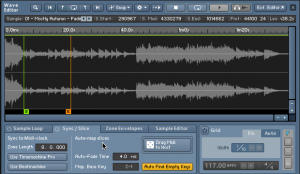 Next click the Use Time Machine Pro button and close the Wave Editor.

Now the Source Module mode has been set to Time Machine Pro and the Speed control has been dimmed out and set to Zone. This indicates that it uses the Zone Length value to determine at which speed it has to play the Zone the phrase will span the same length at your song tempo. 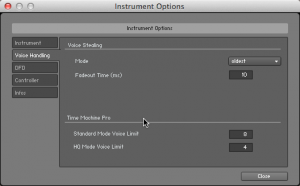 The Voice Handling controls can be found in a new tab in the Instrument Options window.

The Voice Stealing controls that used to be located in the Instrument tab have now moved to this new tab, along with the new Time Machine Pro specific controls.

Visit: Add New York Compression To Your Drums With The Feedback Compressor