Purge Cache
Today you are going to learn how to make a very cool, and very easy to design, analog style...

Today you are going to learn how to make a very cool, and very easy to design, analog style electronic snare drum sound with FM8.

Something you should know going into this lesson, or these types of sound design sessions is that often times you do not need much more than some white noise and your creativity to make a clever and unique percussive synth instrument. In this case, we are making an old-school analog drum element, and I also want it to be flexible enough to be used as more than just a typical snare drum. Therefore I will be adding some tonality to it that keeps it usable for video game design, glitch music, IDM, circuit bending genres, etc. All it takes is a small amount of character not present in most snare drums and the ability to move up and down in pitch, rather than being a static sound.

Let’s get started by routing out X Operator to the main output, at a value of 100%. Everything will be sent through this operator before being heard. Since I’m going for a little extra character here, I’m going  to use three different wavetables. On Operator F I have loaded a Sawtooth wave, Operator E a Triangle wave and Operator D a Square wave. Before doing anything else, I inbreeded the Ratio value of Operator D to 2.

Next, I drew in an envelope for all three of these operators using the link feature in the Expert Env window. This keeps all three sounds developing at the same exact rate.

I then set up the envelope for Operator X, or noise oscillator and saturator. I made this shorter and more abrupt then the others, which may seem a bit odd at first. But I want this sound to be very crisp and snappy, and slightly cutoff. We will further shape the overall sound with a couple of effects next. 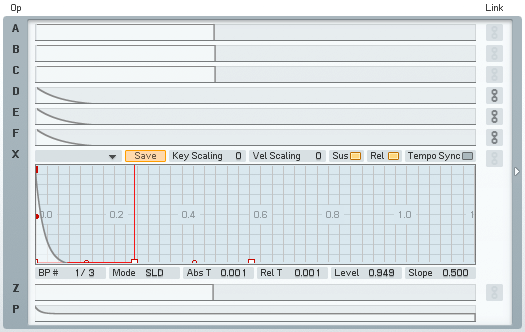 In the Effects window, I added some Overdrive for added impact, and to begin removing some of the lower end noise present. I do not want this to be muddy when played at the lower notes. A Shelving EQ was used to further attenuate the low end and accentuate the high end. Lastly, I added a Reverb effect to help the sound ring out and just sound fuller in general. Here again, I have focus only on the  high end frequencies to carry out after the initial sound is cutoff abruptly by the envelope of Operator X.

The last step in this process was to make a quick visit to the Master window. Here I removed the default Detune setting and introduced some Analog Quality. This last touch just adds that certain something that was present in this type of sound design in the early 90’s, which is what I’m going for.

Below you can hear two examples of this sound. First, just the sound on it’s own, being played as a typical analog snare. Next is the sound playing alongside many other elements.

All I need to do to use this as a more tonal percussive element for the before mentioned types of music, is simply add back the low end of our sound. If I were to focus even more attention on the highs, this could easily be made into a hi-hat. It’s that easy! I hope you’ve enjoyed this FM8 tutorial. If you have a request for a future post or want to share one of your own ideas with the community, just shoot us a message letting us know. Thanks for stopping by!