Purge Cache
Hardware or software, modularity is everywhere. We slowly entering an era where the sequencing...
Save tutorial
Tutorial saved
Share on Facebook

Grids for Max For Live

Hardware or software, modularity is everywhere. We slowly entering an era where the sequencing of notes is no longer set by a grid but more free through open tools.

Grids for Max 4 Live may not be new (2014), but it is an instrument that deserves to be presented because it offers users a perfect emulation of eurorack module “Grids” from Mutable Instruments.

Grids is a topographic drum sequencer and allows you to sequence up to six different sounds.

Three in its basic mode, six with use of accent. 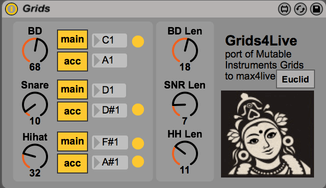 The three foremost knobs adjust the density of the kick, snare and hihat respectively.

Note output for each part can be enabled by the “main” toggle. The “Acc” (for accent) enable the output for the accent for the respective part while drum mode. In Euclidian mode the accent ouput send a note out every time the end of the euclidian loop for this part is reached.
The number of one the right are the midi note number associated with each part and its accent. By default they are mapped to Kick, Snare and Closed HiHat. the Accent to Low Tom, Clap and Open HiHat. Feel free to change them !

Map X and Map Y knobs adjust what is the core of Grids. They navigate smoothly along the map of rhythms.
Chaos allow to add some random variation in the mix.

While in euclidian mode, the knobs on the right control the length of each part, from 1 to 32.
Make sure to automate the parameters with Max for Live LFO, that is where the fun begins !

As a perfect emulation of the Mutable Instruments Grids eurorack module, the original user manual remains the perfect companion to understand Grids for Max For Live.

As this is mostly a port of the eurorack version, most of the original manual applies, with exception made, of course, of the cv inputs, clock in, tap tempo and other things which do not make sense in a daw.

Grids for Max For Live