Purge Cache
This tutorial is the second part of a series on Wave Digital Filters in Reaktor. Last time, we...

This tutorial is the second part of a series on Wave Digital Filters in Reaktor. Last time, we covered the creation of basic one port elements that can be used to model various electronic components such as resistors and capacitors. This time I will expand the concept to include a series adaptor module that can be used to connect the one port elements. We will finish with a simple model of a tube diode saturator.

A series adaptor contains two ‘children’, which can be one port elements or even other adaptors. The adaptor receives the ‘wave up’ signal and port resistance values from each child. In addition, they must provide a ‘wave down’ signal to each child macro.

Like the one port elements, adaptors also have their own wave up, wave down, and port resistance values.

Initially, I created a macro that contained all of these elements to use as a series adaptor but the implementation in Reaktor proved to be less than intuitive in my opinion. The reason for this is that each parent is receiving information from and sending information to it’s children, which can create feedback loops for the unwary user.

I wanted to create a framework that could be re-used easily to create a wide variety of WDF structures so I opted to instead create two macros for dealing with the inputs and the feedback loops of an adaptor separately.

When we do so, the feedforward aspect of the series adaptor becomes remarkably simple – the port resistances from the two children are simply added together and sent to the output as the port resistance for the whole adaptor, meanwhile a simple equation determines the wave up value:

This makes the first half of the series adaptor almost as simple as the one port elements:

In a Reaktor format, all of the wave up signals will of course travel from left to right. WDF structures are built with a tree format, and the ‘root’ of the tree will be the rightmost element. It is at this point (and this point only, to my understanding) that a non-linearity can be added to the structure.

The macro to calculate the wave down signals requires the adaptor wave down,as well as the wave up and port resistance values of the two children.

define the two wave down values. These are called scattering equations.

We wind up, then, with a macro that looks like this:

So this continues the trend of very simple macros, however, connecting them altogether we can achieve some quite complex structures.

The following tube diode model is described in chapter 12 of DAFX: Digital Audio Effects, edited by Udo Zolzer. The model consists of 1 resistor, 1 capacitor, 1 voltage source (the audio input acts as the E input of this module) 2 series adaptors, and a root non-linearity: 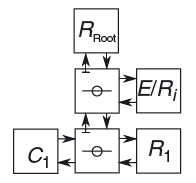 C1 is the capacitor, R1 is the resistor, E/R1 is the voltage source, and the circles with lines thru them represent the series adaptors.

One series adaptor and it’s two children. The resistance and capacitance values are given in the text of Zolzer’s book.

This series adaptor can now be used as a child for the second adaptor:

Next, the root non-linearity mush be calculated, after which we can begin calculating the wave down values:

Here is where splitting the series adaptor into two macros comes in handy, otherwise we would now be getting feedback loops in-between the two series adaptors (and possibly elsewhere as well).

Once the wave down values are calculated, feeding them back into the one port elements can be a confusing task. The resistor and voltage source macros, for instance, need a z^-1 macro in the feedback loop. However, the capacitor and inductor macros will delay the wave down by a sample on their own.

So, in the above structure , the ‘Solid’ parameter of the capacitor macro has been turned off, which signifies that the macro will resolve the feedback loop on it’s own. The same has been done for the inductor model included in the download. For more on the Solid parameter, check out page 113 in the Core manual, specifically section 5.4, Feedback Around Macros.

Okay, all that remains is now is to calculate the root linearity itself. This is by far the most interesting aspect of a WDF. Using the code from Zolzer’s book, we arrive at a root macro that looks like so:

Finally, we simply read the ‘V’ output of the resistor to get our output, as shown two pictures up.

There are quite a few documented WDF structures available in DSP literature. One of the aspects that really appeals to me is that WDFs are completely modular and so has a lot of flexibility in the design.

To that end, I’ve included a download that includes all of the macros from the last two tutorials, as well as the tube diode for good measure.

Please let me know if you find any errors – the code I am basing this work on was written in Matlab, which I am unfamiliar with so it is possible there are mistakes.

If there is demand for it, this series can continue with parallel adaptors and more complex structures, let me know if you are interested!