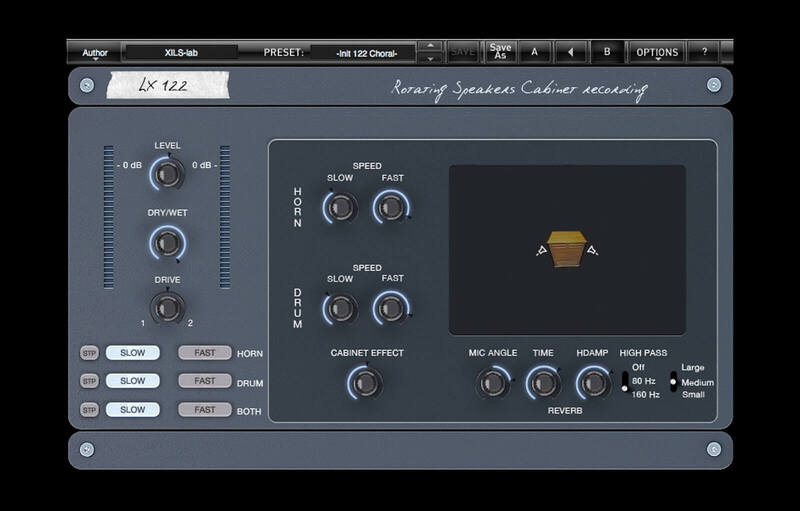 At the middle of the last Century, Mr. Leslie was disappointed by the sound of his just bought B3 Style organ, comparing to what he has heard in the large showroom of the store. He then tried to design a system, which gave the same feeling of a pipe organ by a moving speaker. Further experimentations resulted in the familiar combination of a rotating drum and horn for bass and treble frequencies respectively, creating special audio effects using the Doppler effect.

Although there is a lot a various models, the classic Leslie speaker consists of two driver units – a stationary treble unit with spinning horns (called Horn here), and a stationary woofer and spinning rotor (called Drum here), with two filters, which divide the frequency spectrum between the horn and the woofer.

Both the horns and a sound baffle for the bass are rotated to create Doppler effect based vibrato, tremolo and chorus effects. The rotating elements can be stopped, switched between slow (chorale) and fast (tremolo), or transitioned between the two settings. Not only the unit gives this particular effect, but also the ensemble it creates with the room where it is located.

The LX122 emulates the Horn and the Drum, as well as the room where various coherent reflections are occurring when they are rotating. It also emulates the tube base amplifier as well as the intrinsic characteristics of the Drum (woofer response and drum size) or the Horn (Tweeter response, horn size and diffusers).

The internal cabinet reflections, which give this known mellow specific sound, are also taken into account but with the never done possibility to increase or decrease their effects, going from a standard closed cabinet to a opened air rotating speakers.

Particular settings for the LX122:

LX122 Pro is available in the following formats :

Minimum system requirements: 1 Gigabyte of RAM and a 2 GHz processor.

LX122 Pro is a plug-ins and must be used within a Digital Audio Work Station (DAW) or VST hosts.