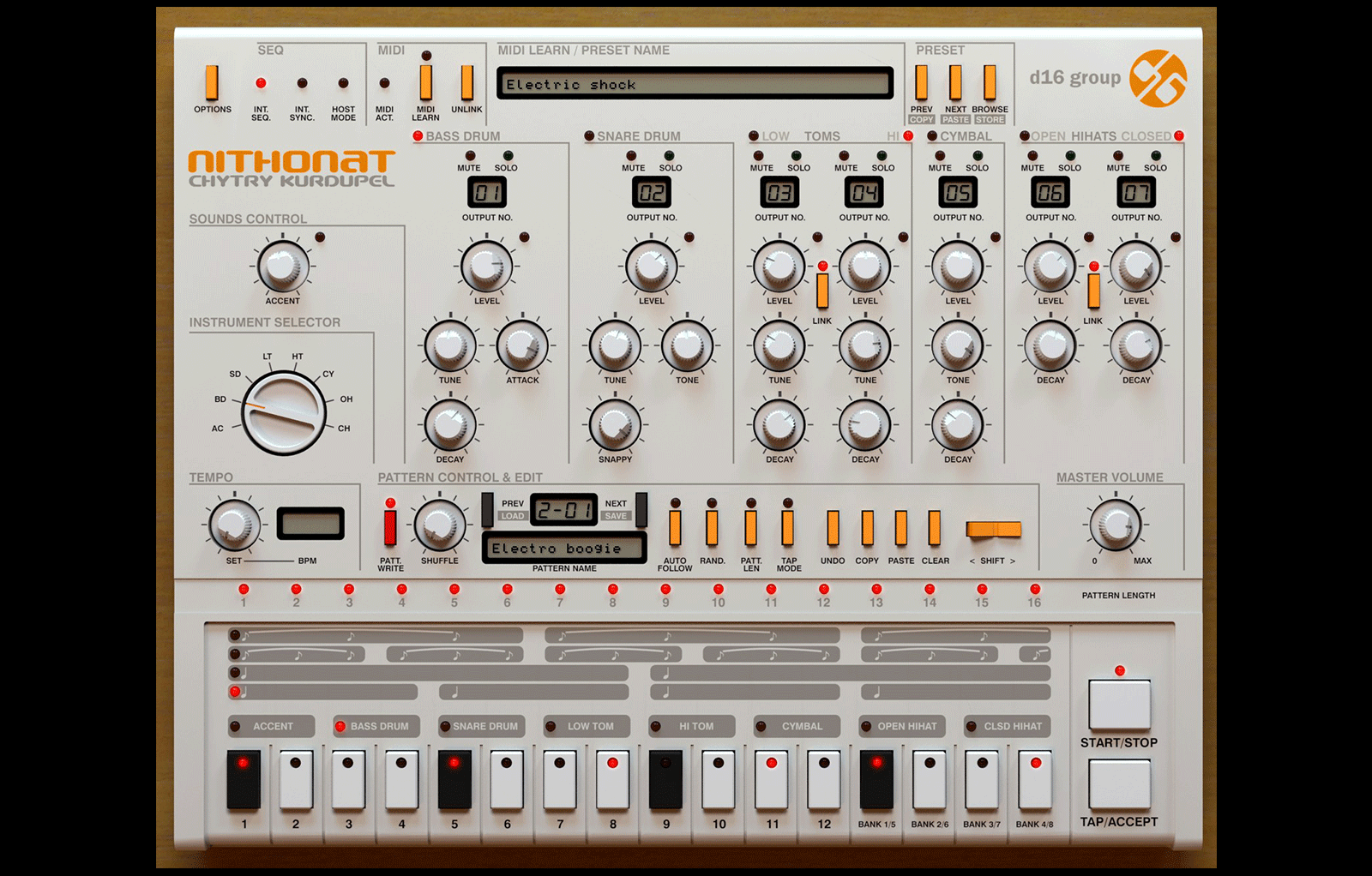 Nithonat is a fully synthesized drum machine based on the classic 606. The unique sound of this machine has been used by many artists over the years in the production of Electro, Hip-Hop and R n B.

Nithonat is a fully synthesized drum machine based on the classic 606. The unique sound of this machine has been used by many artists over the years in the production of Electro, Hip-Hop and R n B. The original 606 has been perfectly emulated. However, since Nithonat is software based, D16 were able to enhance the original with extra functionality. Full control over the sound On the original 606, the only editable sound parameter was volume. D16 have added to the original and as a result, Nithonat is equipped with extra controls which allow each sound to be shaped in ways which were not possible in the original machine. A whole spectrum of sounds is now at you fingertips – rumbling kicks, rustling snares and completely synthesized and unnatural sounding toms and hi-hats. For the first time since the 80s, it is now possible to hear what the analog synthesis of the 606 is truly capable off! One of a kind Nithonat was designed completely from the ground up. Its synthesis is special – even when compared to Nepheton’s. It has very unique and characteristic hi-hat and cymbal sounds which are due to the emulated structure of the circuits in the original. The bass drum has unparalleled attack character and strong punch. The snare sounds sandy. These unique attributes guarantee that our 606 is not a sub-standard 808 but is a great instrument with a unique timbre which will bring an old school feel to any track it is used on. New dimension of creativity Nithonat has a powerful built-in internal sequencer. The tracks can be edited in a very simple and intuitive way and modified with many useful functions. The clear GUI means that sequencer is very easy to use. In addition to having many internal sequencer modes, Nithonat can also be used as a sound module. All sounds and functions within Nithonat can be controlled from a host sequencer. Experimenting with Nithonat can give interesting and unexpected results. Operation of Nithonat is very similar to Drumazon and Nepheton – having knowledge of these will mean that using Nithonat will not require much manual reading! Good choice We believe that we have created a powerful drum machine at an affordable price which is quick to program and very easy to use. Another D16 classic!