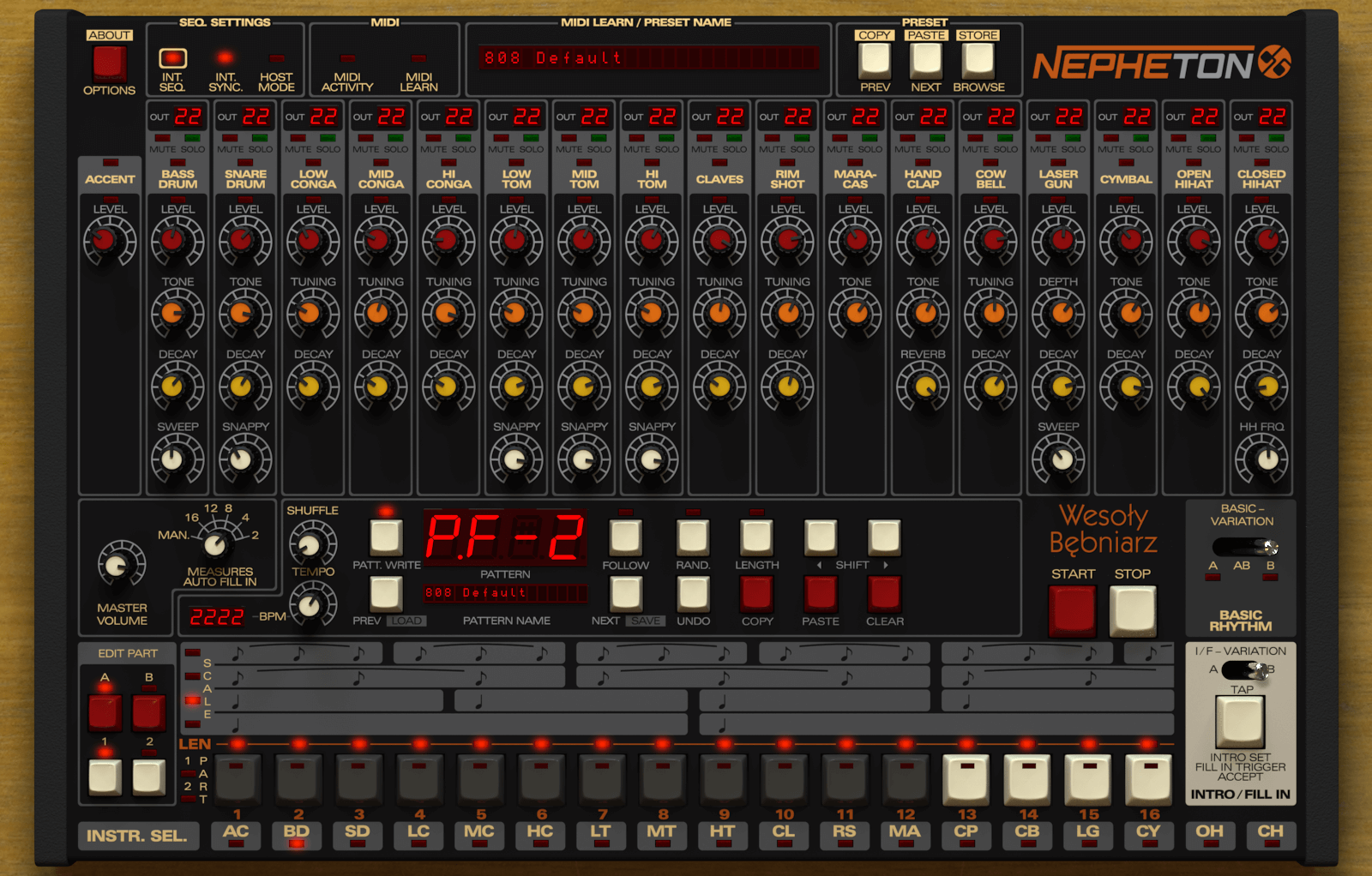 Fully synthesized, perfectly emulating the famous 808 drum machine. All the nuances and details of the instruments sounds are captured perfectly. 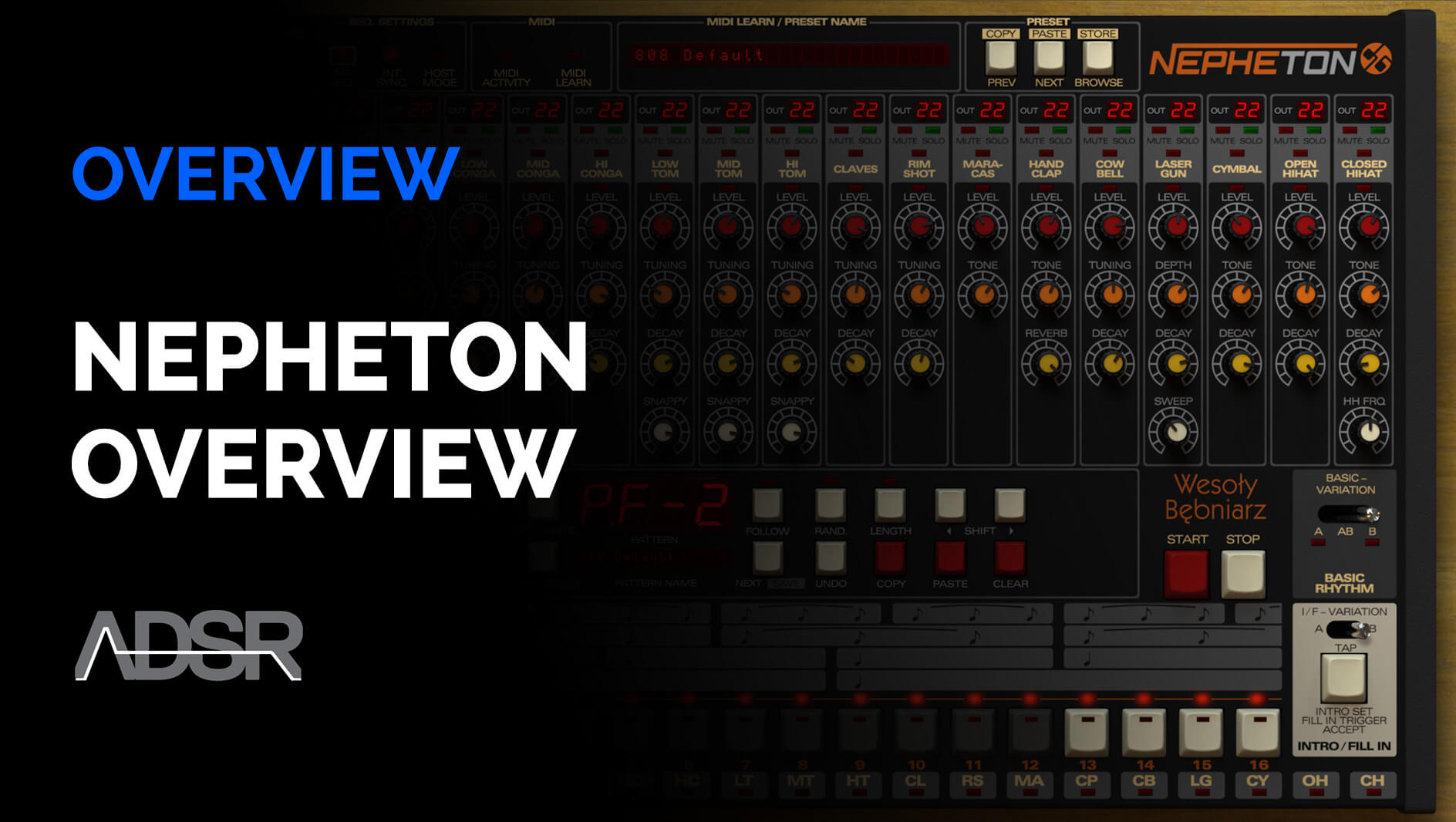 Synthesis Nepheton contains 17 fully synthesized instruments perfectly emulating the famous 808 drum machine. All the nuances and details of the instruments sounds are captured perfectly. The instruments models are equipped with additional controls giving you possibility to tweak the sound much better. Listen to the audio examples or just download the demo and try it out. Outputs Nepheton has a flexible output configuration. Every instrument’s audio signal can be routed to any of the 12 outputs. This allows users to further shape sounds individually or in groups via their favourite plug-ins. Each individual output can be set to mono or stereo. For the greatest 808 fans we’ve added also original Trigger output (configurable as well). Every instrument also has a Mute, Solo button and Activity led. Mute will not just silence the sound, it will stop the sound being triggered. Solo will stop all other instruments from being triggered and only allow the selected sound(s) to play. Control Nepheton has extensive midi control. Midi notes can be used to trigger each individual sound. Alternatively, the internal sequencer can be used. This can be set to play using Nepheton’s internal clock or set to synchronize perfectly to the host sequencer. Most of Nepheton’s parameters can be automated within the host and also controlled using MidiCC with an external controller. An easy-to-use Midi Learn function allows reassignment of any of the parameters. Internal Sequencer Internal sequencer’s memory contains two banks of patterns: simple and extended. There is 16 extended and 96 simple patterns which both can be edited traditionally using the step buttons or using the tap function. Simple patterns are used in Host Mode where each pattern location has a midi note number assigned to it. With these notes you can control freely the order of played patterns. Extended pattern differs from the simple one in it has 4 segments (variation A/B and part 1/2). The whole bank of 16 extended patterns is divided into two groups of Basic Patterns and Intro/Fill In Patterns. You can choose freely from played patterns, used variations, and fill in modes (triggered automatically or manually). It also can be defined whether the starting pattern should be preceded by introduction pattern and many many more. Extended patterns are used when Host Mode is off. A Randomizer function is also provided within the internal sequencer. It can be used to make simple changes to a pattern or create a whole new one – ideal when your creativity needs a boost! Randomizing can be applied to specific instruments and the frequency of occurrence can also be adjusted easily to give you just the right amount. All external files are stored in the XML format. This allows single patterns or whole banks to be exchanged between users easily. XML allows the files to be edited in a text editor. Ideal if you want to post or share a pattern on a web site – just post the text!