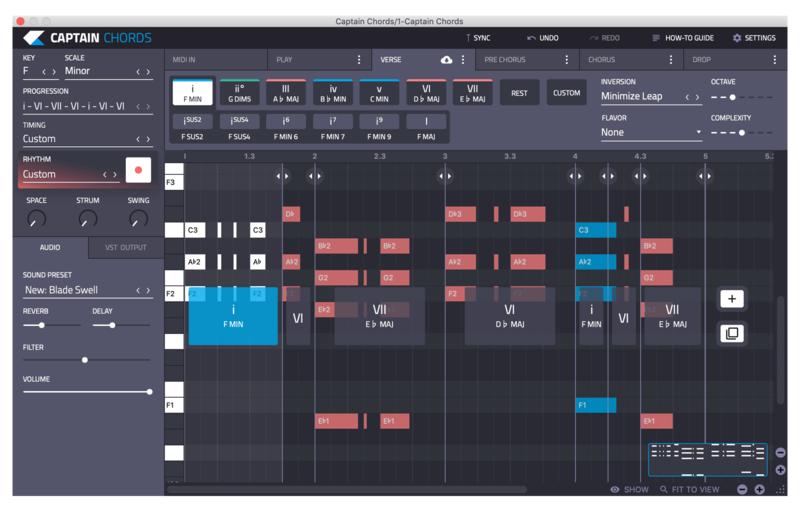 Buy both Captain Plugins + Captain Beat together with this bundle offering. The updated VSTs allow for super-fast songwriting and creation of chords, melodies, bass lines and drums for any genre of music. Captain Plugins are designed for use by producers, DJs and songwriters.

Mixed In Key is excited to release an epic update, Captain Plugins 5 for Mac and Windows. A total of five VST plugins are included in the Captain Plugins + Captain Beat package. The updated VSTs allow for super-fast songwriting and creation of chords, melodies, bass lines and drums for any genre of music. Captain Plugins are designed for use by producers, DJs and songwriters.

Choose from one of the hundreds of patterns from the bank library or record your own rhythms using the computer keyboard.

Select a drum kit from Captain Beat’s sizable kit collection or load in your own samples. Sculpt your sounds using Captain Beat’s Controls and Effects and finish by exporting the Audio or MIDI to your DAW.

Captain Beat allows you to easily mix and match patterns from different genres to create original percussive patterns and is sure to become a ‘go-to’ plugin for producers.

Mix and match over 500 incredible patterns to create your own unique rhythms. Combine different rhythms on different channels. Instantly select genre-defining patterns from hit songs. However you choose to use them, Captain Beat’s Patterns will inspire you.

A workflow for every producer.

Whether you’re a ‘draw and edit MIDI notes’ kind of producer, prefer to tap out ideas on pads, or even your computer keyboard, Captain Beat has your back. It’s simple, slick and tons of fun to use.

Meet the drum kits of your dreams. Our team of elite sound designers created dozens of professional-grade kits. Cross classic re-creations with cutting-edge drum hits, and even add your own samples. You’ll wonder how you made beats before Captain Beat.

Apply Reverbs, Delays and Filter on a per-channel basis.

If you’re a finger-drummer, or just prefer laying down beats in a tactile manner, you’re in luck. Use hotkeys to trigger sounds with your computer keyboard, or connect any MIDI device. You’ll love how good tapping out patterns feels. Intuitive quantize options ensure maximum enjoyment and minimum fuss.

Dynamite for your DAW.

Told you it was fully-featured.