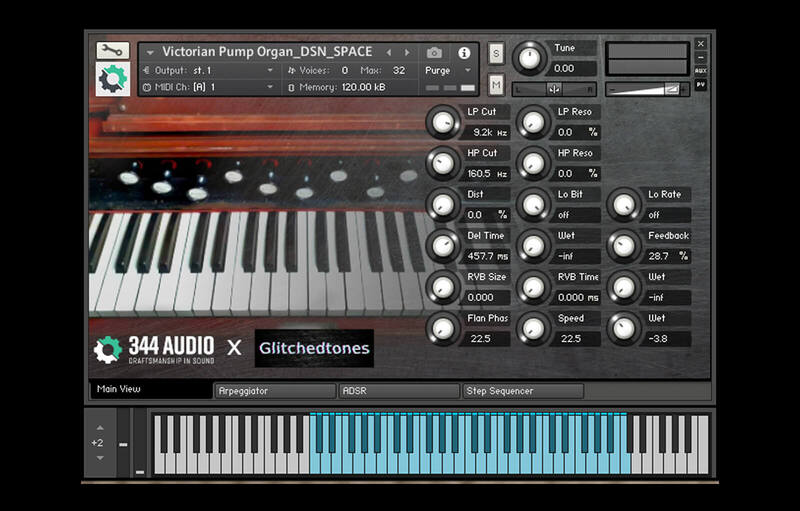 Victorian Pump Organ is our new steampunk-inspired Kontakt library made in collaboration with Stuart Keenan from Glitchedtones.

With 50 different patches including sound design, drum kits and foley, this instrument is perfect for musicians and sound designers to make everything from sea shanties, period style music from the 1800s and early 20th-century all the way to EDM tracks and horror/atmospheric scores.

Stuart Keenan from Glitchedtones faithfully captured a Victorian Pump Organ (built-in 1865, Canada) at a studio in Newcastle with 4 different microphones positioned for treble, bass and stereo room mic perspectives. Our Audio Craftsmen meticulously edited the samples and programmed 50 patches and integrated them into our Kontakt interface giving film composers, music producers, sound designers and game developers a vast array of options to create music and compositions in various genres.

There are 9 main patches including 3 melodic patches, 4 chord patches and 2 foley patches with the organ adjusted at different stops.

Our in house composers built additional designed patches which include; Harp like arpeggiators, ethnic instruments such as the harmonium all the way to electro leads, game boy organs and dubstep inspired basslines. We even manipulated samples and built patches for metal and rock music.

We have included patches for a variety of circumstances like abandoned church organs, space generators and creaky room voices.

We have also included low subsonic impacts and rumbles to add weight to your sounds and music. Some of the patches like glorious arp, telephone arp, tweeting birds, drunken organ, sea shanty organ, harmonica and cathedral hits are ideal for adding texture and interest.

Our user-friendly Kontakt interface provides a variety of controls that encourage experimentation within the patches.

We have included a mic mixing section with ADSR where you can adjust the levels for treble, bass and stereo (multiple mics) if you need to add more width to the mix. The built-in Arpeggiator and Step Sequencer are great for generating hundreds of variations in seconds.

We hope that you will take the opportunity to try out this fascinating and timeless instrument.

NOTE: This library does not run in the free ‘Kontakt Player.