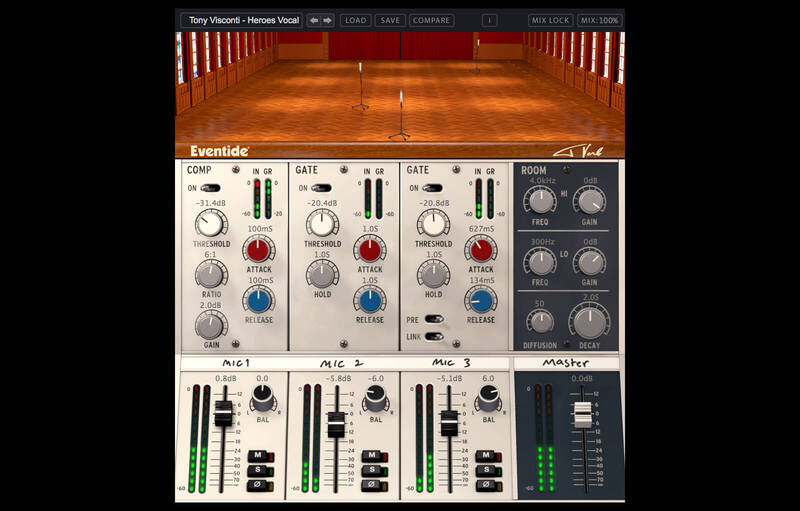 Tverb was developed in collaboration with legendary producer, engineer and musician, Tony Visconti. The plug-in was inspired by the iconic sound of the title track of David Bowie’s twelfth studio album, Heroes, recorded in August 1977 in the shadow of the Berlin Wall. 2 Moveable microphones to adjust reverb size and tone.

The Sound of a Legend

Tverb was developed in collaboration with legendary producer, engineer and musician, Tony Visconti. The plug-in was inspired by the iconic sound of the title track of David Bowie’s twelfth studio album, Heroes, recorded in August 1977 in the shadow of the Berlin Wall.

With only one track left for lead vocals, Visconti was able to harness the power of Bowie’s voice by inventing a stunning recording technique. This technique is the foundation of Tverb.

Visconti set up three microphones in the hall of Berlin’s Hansa Studios, the first for Bowie to sing directly into, a second positioned about 15 feet away and the third further back in the hall.

Visconti placed gates on the second and third microphones set to open as Bowie sang louder and louder.

Tverb integrates three completely independent lush reverbs with compression and selectable polar patterns on microphone 1 and adjustable gates on microphones 2 and 3. Tverb recreates Visconti’s iconic effect as a starting point while adding features that enable new soundscapes and effects. The use of stereo microphones enhances the effect and DAW automation can be used to program the microphones to wander around the hall as the track plays.

Inspiration of the Past/Power of the Future

Tverb was designed with a new level of efficiency for plug-ins.

It captures the rich ambience of Hansa’s studio 2, the historic Meistersaal concert hall, without burdening your DAW’s CPU. Tverb features three independent reverbs, with the ability for the two far microphones to be convincingly placed anywhere in the hall.