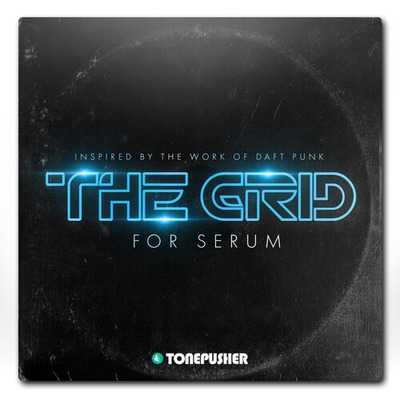 Inspired by Daft Punk’s Tron: Legacy soundtrack, ”The Grid” is a pack of 50 professionally designed presets made for Xfer Serum.

Tron: Legacy is the soundtrack album to the 2010 film of the same name, released by Walt Disney Records on December 3, 2010. It is the first film score by French music duo Daft Punk. The score is a mixture of orchestral and electronic music.

The soundtrack debuted at number 10 on the Billboard 200 albums chart with sales of 71,000 copies. This marked the duo’s first top 10 album/soundtrack in the United States. Re-creating from the ground up some of the most iconic sounds made by Daft Punk.

From the iconic bass sound from ”End of line”, the bigger than life synth lead of ”The Grid” or the analog sounding drums of ”Derezzed” we carefully crafted every sound from the ground up completely inside Xfer Serum based on the french duo’s work.

This pack is bringing you 50 top quality Xfer Serum presets. Some of the macro controls only need a slight touch to change the sound completely and come up with something completely fresh, the possibilities are endless.