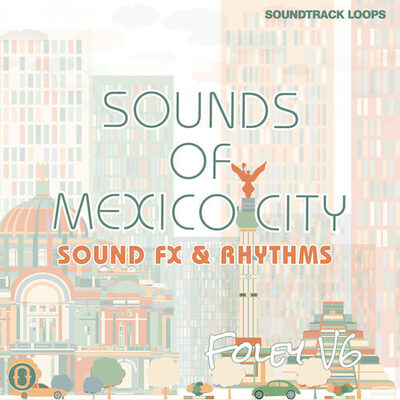 While we marvel at Edgar’s blistering production pace, let’s take a look at what we have in this title.

Churning through 90, 120, 150 and 180 BPM, and for a total of 202 samples, Edgar takes us on a wild ride that immediately brings to mind the classic glitch music of the early aughts—if you like Mouse on Mars, Matmos, and Uwe Schmidt, and especially if you appreciate their most whimsical work, then Mexico City will certainly bring a smile.

The sonic jewels are delivered with the same signature that runs through every Lopez collection in the Soundtrack Loops catalog—bright, crisp, and exquisitely soundstaged.

Beyond the beats, the one shots folder lets you peer deeply into the Foley and location recording DNA, where it becomes obvious that Edgar’s perception of the world is one in which every object has a rhythm, every noise is music, every scenario is a song, and there’s an abundance of joy and strangeness everywhere he looks.