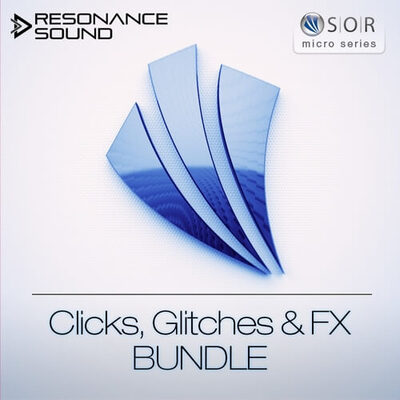 Sounds of Revolution (SOR) presents the ultimate Clicks, Glitches & FX Bundle for a no-brainer discount of 30% OFF!

These inspiring loops & single loop fragments are full of detail, groove and variation – a real enrichment for any groove!

Producers of techno, minimal, electro, tech-house and other “techy” styles of music will get the most mileage out of this pack, but also any electronic style looking to add some unusual, attention-grabbing sounds to their grooves will find lots inspiration here.

If you’re sick of predictable, lifeless beats, this is the antidote!

Whats in the bundle?

CLICKS & GLITCHES VOL.4
Click here for glitches! Never thought this could mean something good, did you? Oliver Schmitt aka Sounds Of Revolution went out in the wild only to return with “Clicks & Glitches 4”, an inspiring premium collection full of detail, groove and variation!

Forget about boring standard loops, simple sounds and overused samples – this one’s gonna spice up your production just right, bringing it to live, leaving a distinct mark and serious damage on the dancefloor. These are probably the most detailed clickloops you ever heard!

CLICKS AND FX VOL.1
SOR Clicks and FX Vol.1 will spice up any electronic music production instantly and effortlessly. Being part of SOR`s Micro Series, this selection of contemporary elements delivers loops and single sounds that will enhance your production instantly while matching seamlessly.

Add sounds like trendy clicks or exceptional FX-samples to sharpen up your tracks and make them more inspiring.

CLICKS & GLITCHES VOL.3
Clicks & Glitches Vol.3 is especially tasty for all who love to add a darker edge to technoid tunes, with preeeetty subby knocks, resonant clicks, intensely fx-mangled percussion and simply a huge overall groove that makes you get creative in no-time!

Producers of techno, minimal, electro, tech-house and other “techy” styles of music will get the most mileage out of this pack, but also any electronic style looking to add some unusual, attention-grabbing sounds to their grooves will find lots inspiration here.

CLICKS AND GLITCHES VOL.2
If you’re sick of predictable, lifeless beats, this is the antidote! These loops deliver those quirky clicks, pops and glitches that can bring a beat to life by infusing it with a unique sense of charm, groove and movement.

And with their spot-on sense of rhythmic space, you’ll feel inspired to add your own touch with your own drum elements.

CLICKS AND GLITCHES VOL.1
A quite well-known situation: the basic elements of a production are all ready, but it still sounds too clean and conventional. The infamous little extras are missing, unobtrusive but not ordinary sounds that provide that certain dirt in a production and not rarely add a very own charm and groove.

You now have the option to try to build them painstakingly from scratch on your own or to make use of ‘Clicks & Glitches’.