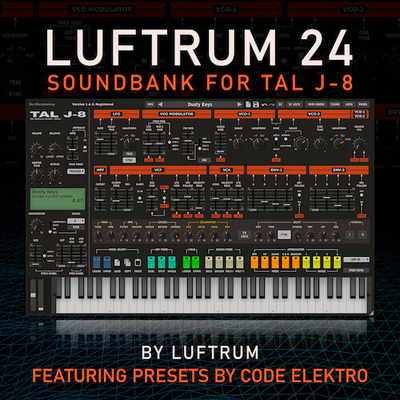 Hey! That’s What We Call Bass

Luftrum 24 is a soundbank containing 148 presets for TAL J-8 which is an emulation of the iconic Jupiter-8 hardware synth from 1981.

The presets cover a wide range of genres and styles from synthwave to 90s French house to ambient and synthpop.

You can own an affordable software version by TAL for a fraction of the price and without breaking the bank.

The sounds in Luftrum 24 are inspired by a broad range of synth-driven artists and duos such as Daft Punk, John Carpenter, Vangelis, Perturbator, Steve Roach and The Midnight with presets ranging from soaring mono leads to dreamy pads over dark basses and delicate synth keys. Check out the preset-by-preset YouTube demo below, going through 30 individual presets from the set.

Out of the 148 presets, 40 are designed by Code Elektro, a critically acclaimed synthwave sci-fi artist from Denmark, whose music best can be described as a hard mix between Carpenter Brut, SURVIVE and Tangerine Dream. Code Elektro made an impressive demo using only presets from the set + external drums. listen above.