Sales:
74
Luftrum 23 for Pigments 2 is an ambient cinematic soundbank for the film scoring space traveller...
5 stars, based on 3 reviews
ADSR_0042_0025
Luftrum 23
Luftrum
17.4
https://www.adsrsounds.com/product/presets/luftrum-23-pigments-presets/ 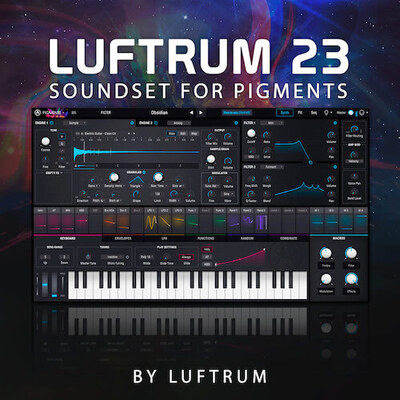 Hey! That’s What We Call Bass

Luftrum 23 for Pigments 2 is an ambient cinematic soundbank for the film scoring space traveller and the electronic producer, containing 100 presets, with 75 original presets and 25 alternative versions. Also included are 22 “sweet spot” FX presets, for the reverb and delay effects.

The set is created by Luftrum and taking the sounds back-to-basics in the vein of early Luftrum releases with rich pads, silky Vangelis-like keys, bitcrushed yet mellow synth leads, underscoring textures and conceptual granular work with sonics originating from space itself, like the dusty, mesmerizing granular pad Stillness of Stars sculpted out of a short snippet of otherworldly frequencies from Voyager 2 as it passed through the outer magnetosphere in 1979 and the pulsing drone based on the cryptic FRB signals from deep space billions of light-years away, which are intercepted, noise reduced and timestretched 350 times.

The soundbank is designed to evoke emotions and raise questions about the depths of space and time, journeys to the unknown, life and existence and the symbiosis between the tiny pale blue dot we call Earth and the vast eternal universe, with inspirations drawn from artists like Biosphere, Jonn Serrie, Vangelis, Carbon Based Lifeforms, Stellardrone, Ascendant and Steve Roach.

All presets got a few dB headroom, have modwheel assigned and aftertouch where it gave meaning. The soundbank is fully NKS compatible with NKS presets and NKS audio previews for users of Native Instruments hardware. There’s a PDF guide included, describing how to install the set.

Some of the audio contained are from the NASA archives and used in compliance with their Media Usage Guidelines.

NASA is not affiliated with Luftrum and does not endorse the use of the audio. FRB signal used from the Harvard Dataverse and the sonification itself is in the public domain, according to the terms.