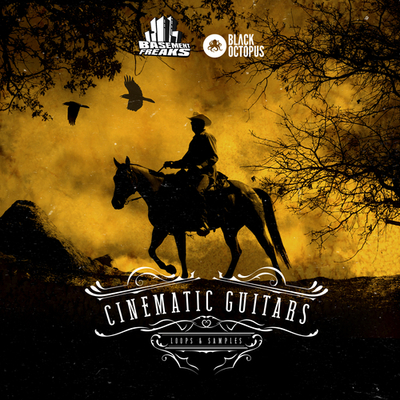 Step into an epic void with the Basement Freaks new chilled out pack Cinematic Guitars! The producer unleashes his 90s influence in full effect, with sounds inspired by the late 80s and early 90s industrial EDM, Electronica Surf, and Synth Punk styles.

Using loads of leading effects of the era’s, Basement Freaks injects even more warmth and essence with his use of a vintage Fender Stratocaster and British Tube DI’s, to add that extra beefy saturation tone and character.

Inside is everything you need for score, soundtrack, song production, and epic-awesome-sauce, that can be placed into multiple genres or soundscapes fusing Electronica Ambient sounds with modern day production styles.

Along with these atmospheric guitars and dreamy sounds, there are floaty top notch FX, bold and deep bass loops, misty music loops and underwater drums to add that extra layer of euphoria to your production.

Inspired by artists like Autechre, Future Sounds of London; this pack adds copious amounts of emotion and atmosphere to any and all styles and is a must have pack! So dive in DEEP with Cinematic Guitars today!