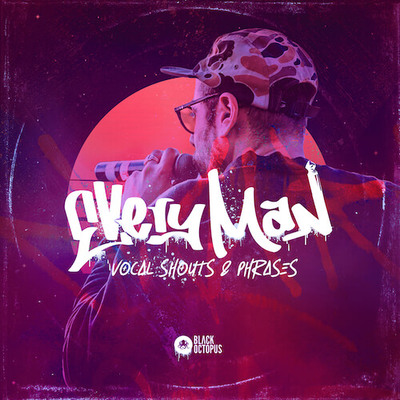 EVeryman Vocal Shouts & Phrases brings the voracity to hype the crowd and instantly up the vibe with an INSANE 680 shouts and phrases, alongside 79 beatbox one-shots with 4 full loops.

No matter what you choose, with old school flare combined with advanced production techniques, EVeryman will add some fire into your tracks. Evan Shafran a.k.a. EVeryman delivers a fluid flow, with conscious optimistic lyricism. His high energy beats convey influences from old school hip hop and reggae which brings the crowd to life up on their feet. He’s performed and toured with acts such as Pretty Lights, Odesza, Mark Farina (to name a very small few) and has graced some massive festival stages, such as Coachella, Burning Man, Shambhala, and Lightning in a Bottle.

Long time collaborator and friend of EVeryman, Qdup recorded, engineered and edited the samples in this pack as well as made the demo song for the packJ ason Brown is Qdup, and has been making dance floors groove and butts move worldwide for over a decade.

His tunes have consistently made it into top 20 charts and Qdup’s projects have been praised by funky dance music aficionados world wide. Having released on many well received labels including Bombstrikes, Fort Knox Recordings, Goodgroove, Air, ESL Music, Royal Soul, Super Hi¬Fi, MustBeat and his own Qdup Records imprint.

Beatboxing: A massive collection of beatbox one shots is inside, ready for you to tear apart and get creative in how you layer your components.

Throaty Bass hits, breathy one-shots, fierce hi-hats (both closed and open) hard-hitting kicks, diverse percussions, and crisp snare claps. They’re all ready to construct you own beat or are perfect to build up tracks by adding a little bit of a human touch to your drums.

Shouts and Phrases: This acapella arsenal is ready to add some topline sizzle, with high energy shouts and catchy spoken phrases and words.

All vocals are recorded dry so you can add your own effects to suit your taste. Expect classic terms such as ‘what’, ‘bounce’, ‘alright’ alongside unique phrases and spoken numbers 1 to 10 that are excellent additions to genres such as Hip-Hop, Funk, House, DnB, and more!

EVeryman’s passion and expertise shows through his lyricism and fluid flows.

This pack is no exception, all vocals have been carefully recorded and produced with key and tempo labeling. Ready to be inspiration for your next banger or injected into any project that needs some of the EVeryman flavour.

** EVeryman requests that you not use her name in the branding of your music, track credits, title, or artist names.
*Drums and melodic content in demo are not included in the pack. This is a vocal and vocal effects pack only.”