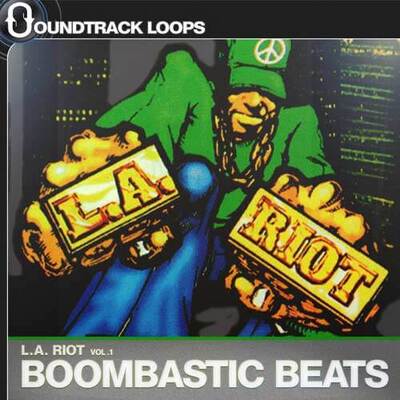 Soundtrack Loops is proud to be the exclusive distributor of the legendary L.A. Riot sample series. For the first time, we bring you the classic L.A. Riot Vol. 1 translated by our team of sound designers into popular formats like Recycle Rex, ACIDIzed Wav, and Apple-looped Aiff. These timeless loops are just as gritty as before yet now they’ve been reborn in 24 bit 44.1kHz stereo high quality sound.

L.A. Riot Vol. 1 Boombastic Beats has been meticulously remastered, edited, and formatted from the infamous 1995 Ensoniq format disk “CDR-15″ release. There’s no need to go digging deep for drum grooves as this set delivers all that vintage tastiness that was once only available on retail shelves. For all schoolers – both old and new – this collection is for you whether you’re craving ’90s nostalgia or ready to jump into a Hip Hop time machine.

There are 256 Boom Bap Hip Hop drum grooves and turntable scratches, ALL organized by tempo and perfectly looped. This sounds set would have cost you $100 back in the ’90s but now you can get the format of your choice – exclusively from Soundtrack Loops – for only $29.95.