Purge Cache
This tutorial will show you How To Use a Multitimbral Intance of Kontakt in Logic Pro X. How To...

This tutorial will show you How To Use a Multitimbral Intance of Kontakt in Logic Pro X.

It’s been a long wait, but finally Logic Pro X has arrived. And with any new software people have many questions about how to to things they used to do in earlier versions. One of the things we’ll look at today is using a Multi-Timbral instance of Kontakt in Logic Pro X.

If you already have a project open, add a new track by clicking in the main menu (Track>New Tracks). You can also use the key command (Option+Command+N).

At the top of the New Tracks window, select Software Instrument, check Multi-timbral, enter the number of parts and click create. Each part will be a sub-track in Logic Pro X and an Instrument in Kontakt.

A new feature in Logic Pro X is Track Stacks. When creating a Multi-Timbral Software Instrument, a summing Track Stack is created with the sub-tracks (parts).

Open the Track Stack by clicking on the arrow next to the name.

Click on any subtrack and Add an instance of Kontakt by clicking on the Instrument slot.

Navigate to one of the multiple output Kontakt versions. 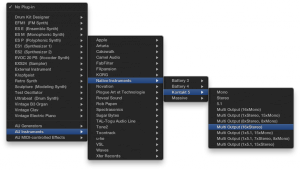 In Kontakt, go to outputs and make sure you have enough outputs. If you don’t, add them.

In Logic Pro X, show the mixer by pressing x and add Aux tracks (up to 16), by clicking on the + on the Instrument Track.

And now you have a Multi-Timbral instance of Kontakt with Aux tracks and a summing Track Stack.

While this method existed in Logic Pro 9, it was a clunky option and nobody used it. Most people used the alternative method of creating a Software Instrument track and used the ‘New with Same Channel Strip/Instrument’ to create the additional tracks for their Multi-Timbral instrument. We’ll look at how to do that same method in a future tutorial.

Visit: Use a Multi-Timbral Instance of Kontakt in Logic Pro X