Purge Cache
This is a third part of a drum synthesis series. In this tutorial we will dig deeper into...

This is a third part of a drum synthesis series. In this tutorial we will dig deeper into fundamental theory behind drum synthesis which we need to understand in order to synthesize convincingly sounding drum sounds. Following few very important guidelines and observations from the theory part of the tutorial we will then create bell sound in FM8 in order to see those principles in action.

The vibrating string is perfect example since we can describe it with using harmonic oscillator model.

In theory by doing that we can determine any harmonic partial in harmonic spectrum of the sound. This way we can describe all the fundamental properties of almost any instrument from piano, brass, violin, organ and so on.

This also means that we can synthesize any of these instruments with using a small number of simple harmonic waveforms. This way we can imitate the main harmonic components of  instrument.

So any synthesizer which offers three main waveforms such as sine, square, saw and also triangle can emulate the most of the instruments that we can describe trough the harmonic oscillator model.

If we look at strings we see that the overtones of the string occur at integer multiples of the fundamental frequency as we can see in the picture below. And because of that sounds have musical quality and a sense of pitch.

This is not the case with drum sounds, where the overtones of the membrane also occur at enharmonic frequencies and thus have no obvious relationship to the fundamental.

So frequency spectrum of any drum is not consisted entirely of harmonically related partials, but instead includes components whose frequencies are not integer multiples of the fundamental frequency.

In reality these overtones are not really randomly spaced in the frequency spectrum but they are determined by complex physical processes which we can only describe with a use of 2 dimensional wave equation which involves complex mathematics.

Roughly speaking the string has only one dimension, it’s length.

If we look at a membrane of any drum we see it has more than one dimension.The vibrations travel trough it’s surface which is two dimensional compared to the string which again roughly speaking is one dimensional.

And because of that we can’t describe what happens using the harmonic oscillator model but we must look into circular membrane model to describe the process which is a bit more complex topic.

In drum synthesis with standard subtractive synthesizer we would instead use noise generator or ring modulation to emulate dense cluster of harmonically unrelated frequencies.

But since noise generator produces all audio frequencies simultaneously we can’t really distribute its harmonic frequency content as we would have to in order to emulate complex enharmonic relationships between the frequncy components of the drum sound.

With FM synthesis we can do just that.

We can emulate these unevenly spaced partials of the sound spectrum with operators which are more and less related to the fundamental frequency of the sound. And how we do that?

Simply with using the non integer ratio values and with frequency modulation between the operators.

By that we are really just non-linearly combining two waveforms. One waveform is used to vary the frequency of the other.

In other words if we use modulator and carrier frequencies that are in more or less harmonically unrelated relationship we can create waveforms that have seemingly non-harmonic spectra. 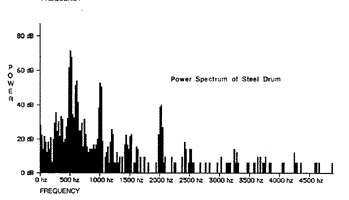 When we hit a any drum the sound decays in a very complex manner. Enharmonic partials in drum sound have their own different decaying times and complex frequency changes which are specific for a certain drum or bell type of instrument.

Some percussive type sounds exhibit more harmonically related components than others. We all know bells for instance can be tuned.

If we examine the bell sound we first hear the strike sound, cluster of enharmonic frequencies which die away quickly, then we hear second phase of the sound consisting of a low harmonics and the third and the longest phase is the lowest part of the bell sound that also has the longest decaying time.

Frequency modulation is a very good way to emulate this process.

So for the first phase of the bell sound we need to produce sound burst rich in enharmonic frequencies. We will emulate that by using modulators and self modulating operators.

For the second and third part of a sound, we need to create longer sound with more harmonically related partials.

We also need so simulate the decay of the sound so it will slowly fade away. For this we will use amplitude envelopes of operators to vary the timbre and amplitude of the sound trough time.

Synthesizing a bell sound in FM8

Enable operator A.
Set it’s ratio to 14.750.
Set self-modulation value to 53.
Set the envelope like in the picture below.

We will use operator A just as modulator for operator B which will be one of our three carriers.

Each of the three carriers in our patch will act as one phase of the bell sound.

Set operator A to modulate operator B with the amount of 100. With this we have created harmonically more and less related sidebands around our fundamental frequency of the operator B.

Go to the Spect page of the synth.

The peaks represent our frequency components and you can see that they are quite evenly spaced across the entire frequency spectrum. This means there is still strong harmonic relationship between them.

But in physical world nothing is perfect so we should try to inject some of this imperfection by slightly detuning our operators. We do that by setting the ratio value to a non-integer value like 14.7532.

We can do that also by setting the offset value we add or subtract constant offset value in hertz to the frequency set with ratio parameter.

Set the parameters of operators A and B like in the picture below.

Now in the picture below we can see clusters of almost randomly spaced smaller peaks around loudest frequency components.

Loudest harmonic partials are strongly related to fundamental frequency of the operator B.

But also note that the frequency content of operator B is also determined by operator A which is modulating operator B.

This way we have established quite complex relationship between our harmonic components in a sound.

Around these loudest peaks you see enharmonic partials which are also related to our fundamental tone but in a much more complex manner and our ear cannot resolve that relation anymore so we percieve it as noise. But still very different from the noise we obtain from standard noise generator in any synth.

If we raise the modulation amount of operator A to B to 58 we can see that introduces even more randomly spaced sidebands around our loudest frequency components in the sound spectrum.

Now you can probably see why FM synthesis is so appropriate for creating drum sounds as you can see we have created complex quasi harmonic sound spectrum which you need in order to emulate drums.

Here is a sound sample of the first part of the bell sound, I have also added Chours/Delay effect from FM8 effect section just to add some ambience.

Lower the audio output of the B operator back to 42.

So we have created the first phase of a bell sound.

Now we need to create second longer phase, which has much more harmonically related overtones but is still rich with enharmonic frequency content.

Enable operator C. Set it’s ratio to 14.4950 and offset to -4.09. We will also use it just as modulator for operator D which will act as our second carrier.

Set the envelope a bit longer than for the first two operators.

Set operator C to modulate operator D with value of 77.

Enable operator D and set it like in the picture below. Set the audio output of operator D to 80.

Now we have again created quasi-harmonic spectrum but still the harmonic partials of the spectrum are so strong we still percieve the general pitch of the sound.

The third phase of the bell sound is the lowest and the longest part of the sound.

So we must set the ratio value of our carrier to the lowest value and also introduce some noise into the waveform.

Set modulation amount of operator E to F to 53.

Enable operator F and set it’s ratio to 1 and set audio output to 90. Set the envelope like in the picture below. Notice it is a bit longer than other ones.

So these drum phases which we used to emulate bell sound are in reality very much part of the same thing since bell is a single physical object that vibrates.

In order to very roughly emulate this complex internal relations between all three parts of our bell sound we should introduce very small amounts of modulation between our three carriers and also modulators.

There are no rules for this, just experiment with different small modulation amounts.

You should also apply some velocity modulation to amplitudes of all three carriers.

Add also key scaling to the envelopes so the higher note we play the shorter will envelope be.

Ok, so why all this bell sounds. I know most of you probably don’t need an arsenal of different bell sounds at your disposal. And now you even know how to create one.

This is because next time we will be creating some percussion instruments and the principle is very much the same.

The bell sounds are quite easy to recreate but if you want to emulate different percussive and drum sounds you must be much more specific and careful with programming the synth in order to get convincing results.

Probably the most interesting part of creative drum synthesis is in creating your own drum sounds which cannot be found in a physical world.

But to do that convincingly you also need to know how to emulate the properties of a real drum sounds to a certain degree.

And since the bell synthesis is the first step in this way I hope this tutorial will help you in understanding the basic principles behind it.

Next time we will look into more practical examples on how to create various percussion sounds.

If you have any questions and comments feel free to leave them below.